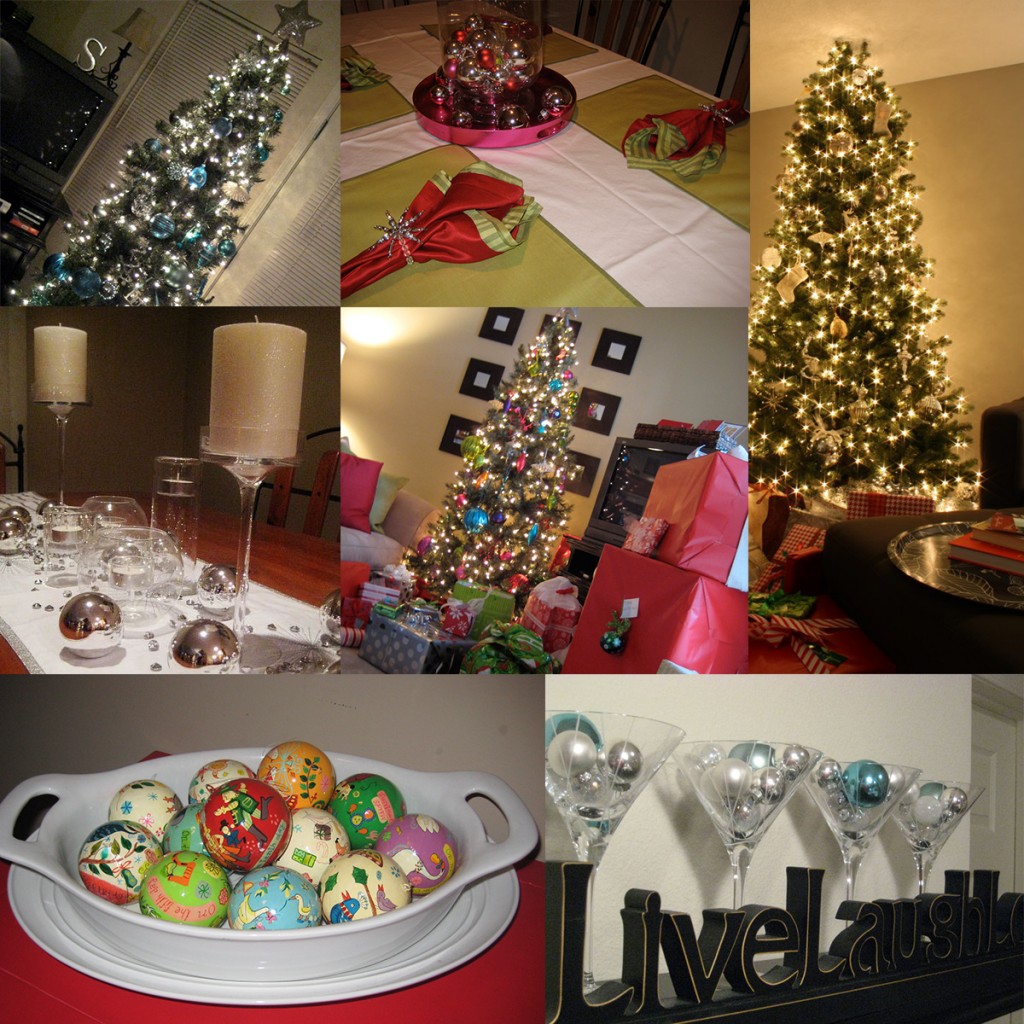 One of the many fun things about keeping a blog is the ability to go back over time and reference previous days, weeks, months, and eventually years. Sometimes I like to randomly look up what we were doing on this day a year ago, or go back and read a bunch of our “just married” stories.

In other cases, it’s fun to see things you tried (and either love or hate now), how your style has evolved, and what you’ve learned. This week for me, it’s been Christmas decorating. 🙂 It was harder to get very “into” it when we had a shoestring budget and were renting so it didn’t quite feel like our home anyway, but it’s still fun and heartwarming to look back on the Christmases we’ve celebrated during our marriage and remember what “life” things were going on in the background, behind the photos.

2007 – Our first married Christmas. We were new to Des Moines and thrilled to be relocated from Chicago that summer in our first Des Moines apartment. We had actually moved from Charlotte, NC, to Chicago, to Des Moines all since the previous Christmas, so we were stoked to be staying in one spot for a bit.

2008 – A more stressful year, having lost my job in late October and working some ad-hoc jobs while searching for something more permanent. At the same time, Page was worried at the time about keeping his own employment status. Still in our first Des Moines apartment.

2009 – First Christmas in our townhouse. While we were still renting, this was a great move and we loved having a bit more space. It felt more like a house. I had found a home with a new employer by this year and Page was starting to get excited about making a move of his own, and fortunately on his own timing. In short, life was very good this particular year and we were more at ease about everything. This particular post made me realized I have improved my photog skills in recent years, just a tad! Ha!

2010 – I specifically remember not doing as much this year for decorating. We bought a new “main” tree and did it up, but I didn’t decorate any other rooms. This year was a busy one for us both with our freelance jobs on top of everything else, and I think there just wasn’t a lot of free time. After the first couple years of marriage involving one or the other being unemployed, we felt behind in our savings and we were in overdrive mode to save for a down payment, so we worked what felt like every waking moment. When there was a spare minute, we were completely lazy and wanted to do nothing but lay on the couches and stare at the one tree we DID manage to put up. We both had a hunch that this might be our last Christmas in a place that wasn’t “ours”. We had secretly made a goal to make 2011 “the year of the house”. We just barely squeezed in under the wire…

2011 – Just days after moving into our home (closing on the 1st and technically moving “in” on the 8th) we mustered the motivation to at least put up the tree and even hung a box of ornaments we were able to find among the piles. I’m so glad we did. I read this post now and I can sense how totally exhausted we were and just ready to be in a put-together house after a few months of not. I remember taking a lot of crap for our frustration haha – people told us just wait until you have kids and have to move! I can’t imagine. It was enough just being Type As that had to have it all unpacked, organized and decorated RIGHT NOW, working and running second jobs, and trying to squeeze in the handful of holiday parties and get-togethers on top of it all. There were lots of wee morning hours unpacking, catching a few shorts hours’ sleep, then going into the office. But we were so damn excited to be in our house and loved every minute of our non-traditional Christmas season that particular year.

It all makes me appreciate the calmness that has encircled us in 2012. What a difference a year makes in having a little time and energy to plan ahead and enjoy the process of pulling this together. Already excited to plan the 2013 version of our house’s holiday decorations — next year it will include the basement! Woo hoo! 🙂