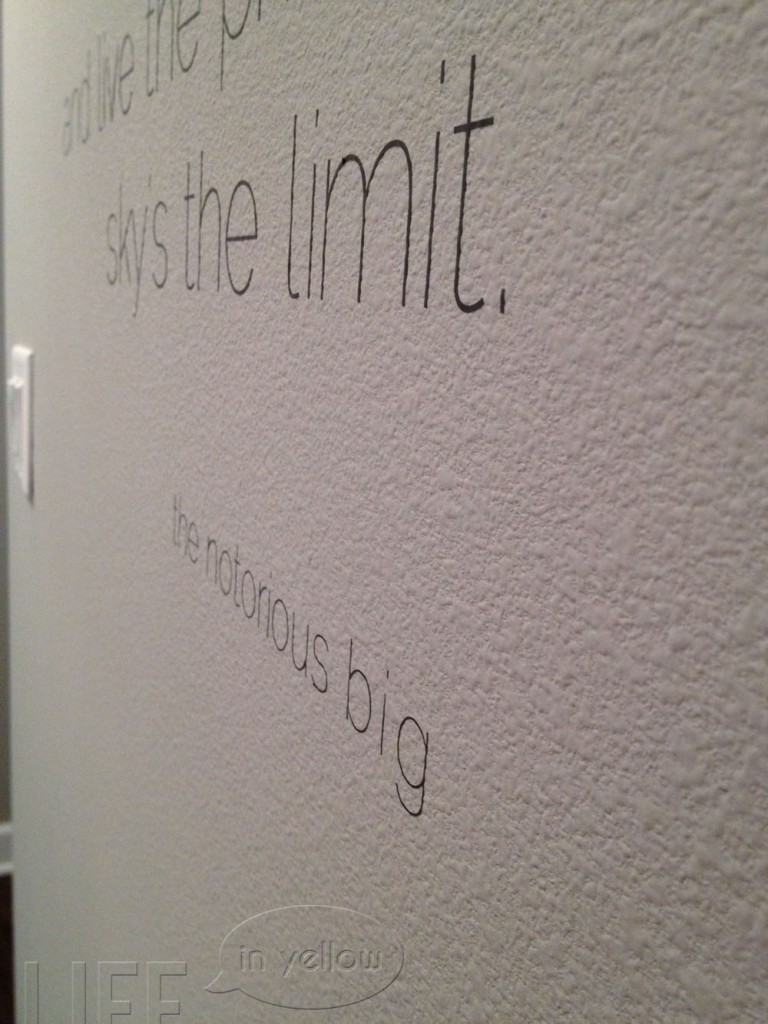 Page and I had long planned on putting a cool quote in the front entry to greet guests coming through the front door. We also liked that it would be in a spot we, ourselves, would pass by each day. But to be placed center stage, the quote had to be a really good one; nothing cliche, and nothing we’d get bored with quickly. Page originally joked that we should put up a Notorious B.I.G. quote…he was totally kidding. (For anyone not familiar, B.I.G. was a progressive and well-respected rap artist who was killed in the late ’90s.) 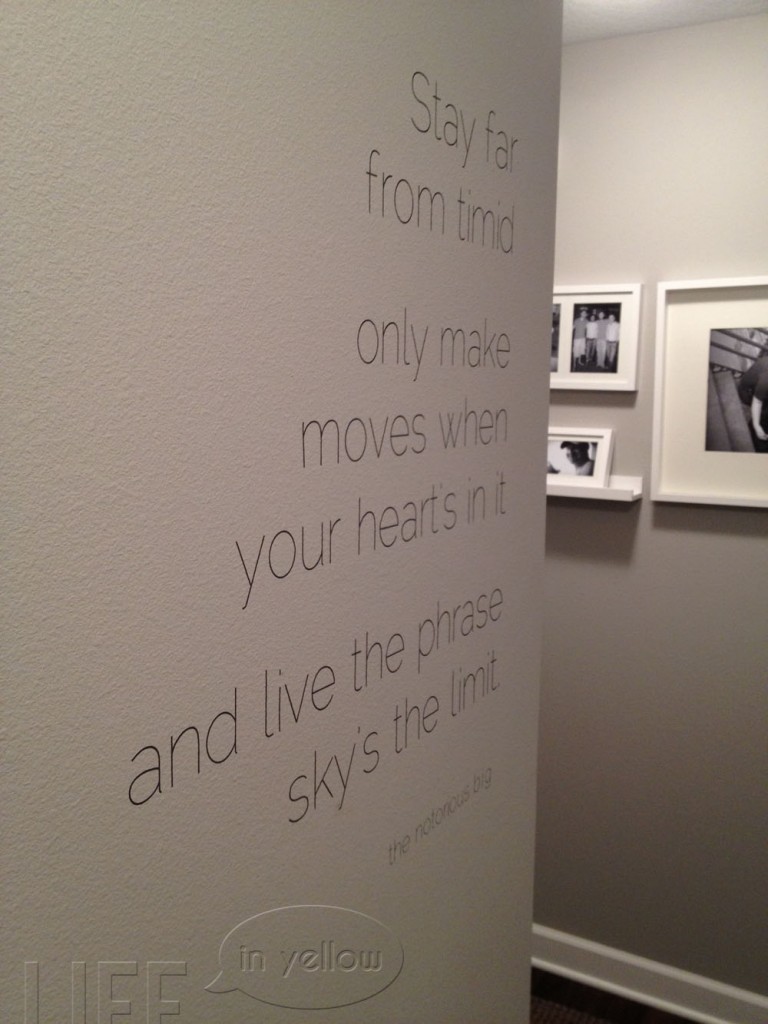 After narrowing down the list of phrases that would fit this space, I stumbled upon this site – every day, the author of this blog posts a song lyric submitted by a reader. I combed through the archives for any last contenders for the space and couldn’t believe it when of ALL artists, the lyric that resonated with me most was this one…and it was by none other than Mr. Smalls, himself. I love the words because they encompass so much of how Page and I try to live our lives, but even more because of the source – totally unexpected and quirky to have rap on your suburban wall. 🙂 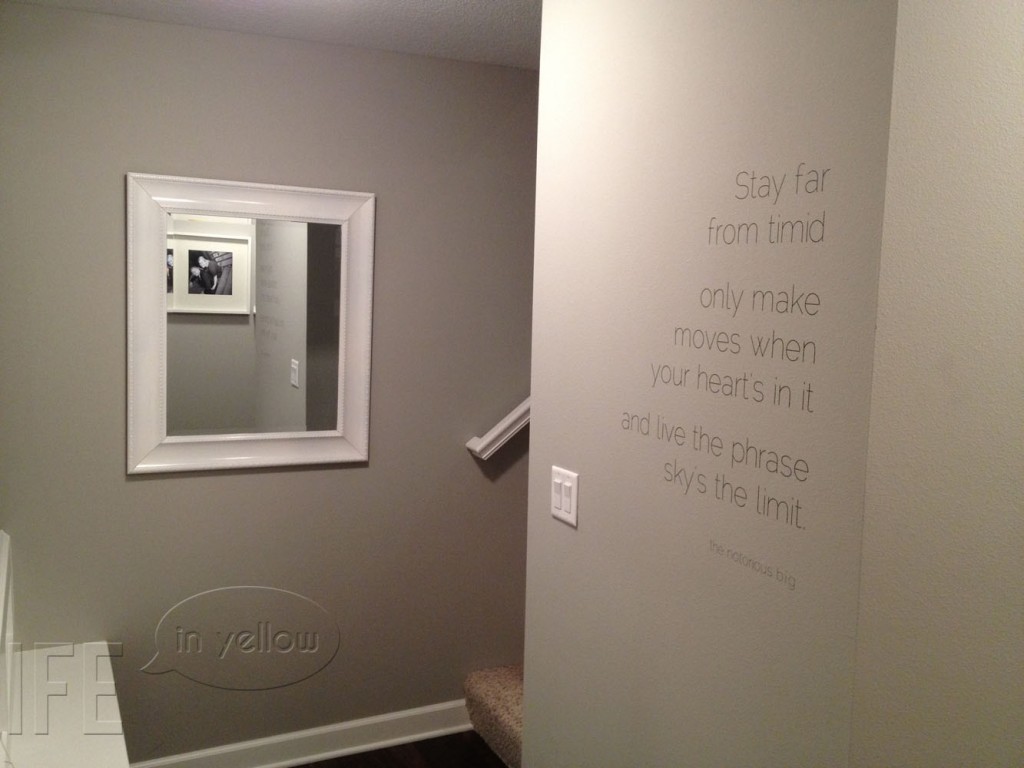 I worked with a fabulous Etsy artistan to bring this to life. I had seen her amazing wall decals before and contacted her about designing this one myself and paying her to print it for me. Danielle is super nice to work with and I am so impressed with the quality of her products. Because of the uber-thin font I chose for this one, I had to be very patient and meticulous (a stretch for me – it took me over a half hour to get it all applied!) but in the end, I think it’s the thin font that gives it the perfect amount of blending and standing out, all at once. It looks black in photos but is actually the dark charcoal color – perfect on top of our light grey walls. I knew I had to contend with the light switch on the left side of the wall, so I right-justified the font to avoid the switch altogether. I love the way it lines up with the edge of the wall coming around the corner. I initially thought I’d make this much bigger, but something was telling me to restrain a bit and not go too scary-big. I also originally laid the quote out with all of the punctuation, including putting the last line in quotation marks, but decided it was too distracting. In the end, I’m so happy I went with my gut on those two things – always helpful to lay something out, then walk away for a bit and re-visit it later with a fresh set of eyes. 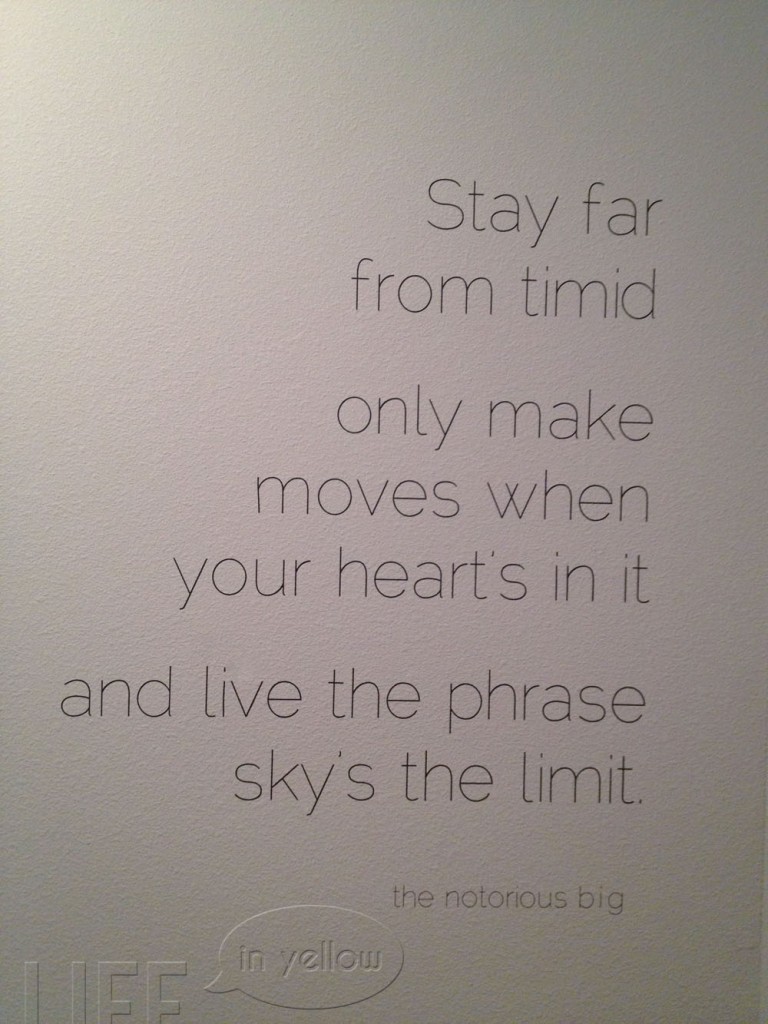 I think Page was floored that I actually got on board with using lines from a hip hop song, but if I’ve learned anything while pulling our first home together, it’s to take some risks…and this one totally paid off!