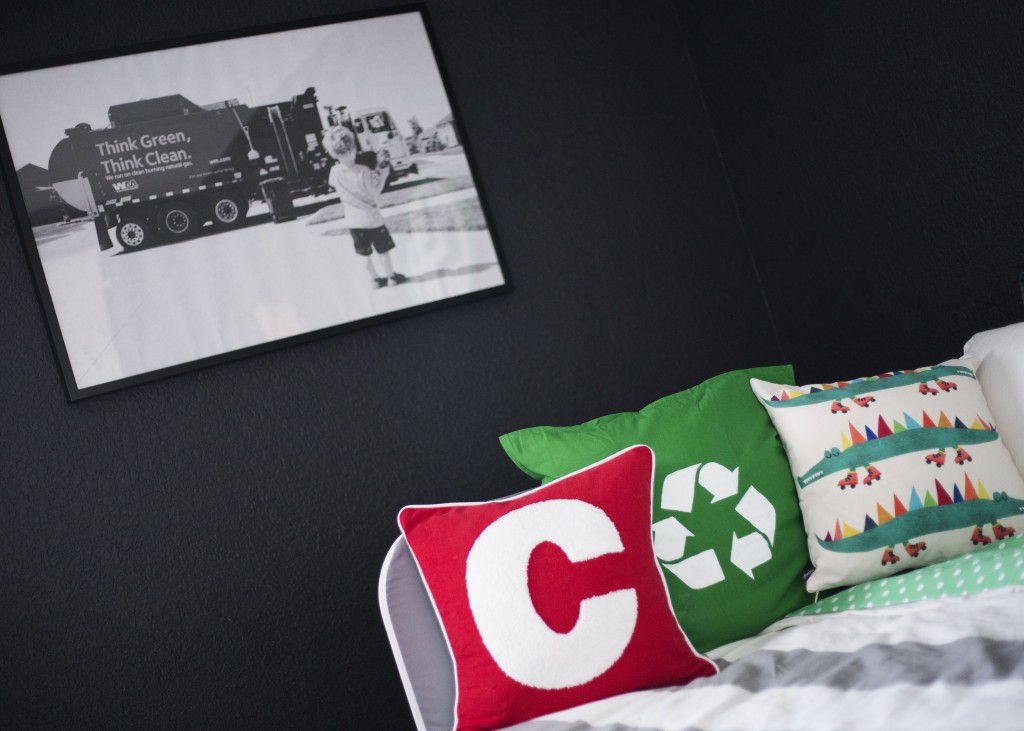 Even before we finished swapping the nursery and the big kid room, this oh-so-big kid was begging to sleep in here. He had exactly zero issues making the transition to new bed and new room, and we haven’t looked back…although I have a hunch as to why this room is where he wants to be. 🙂 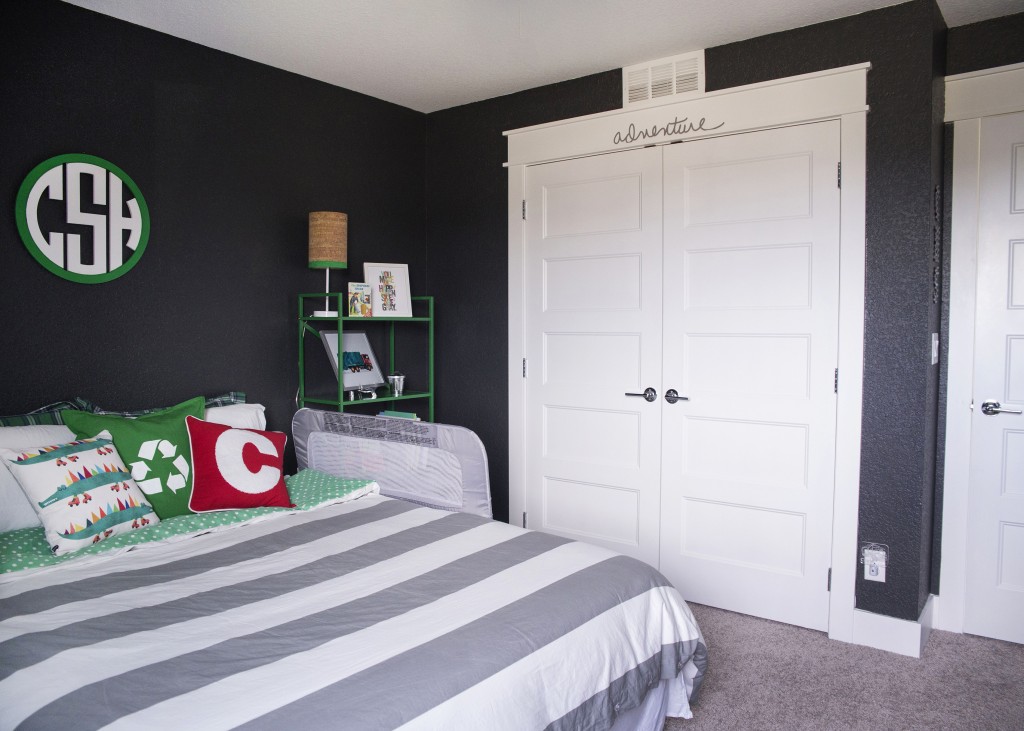 I’ve always shied away from anything too “themed” when it comes to decorating — cohesive pieces, yes — color palette, yep — so as I rolled around the idea of working in some garbage trucks here and there (along with other favorite things) — I had to apply a little creative brainpower to make it COOL and not too cutesy or cheesy. 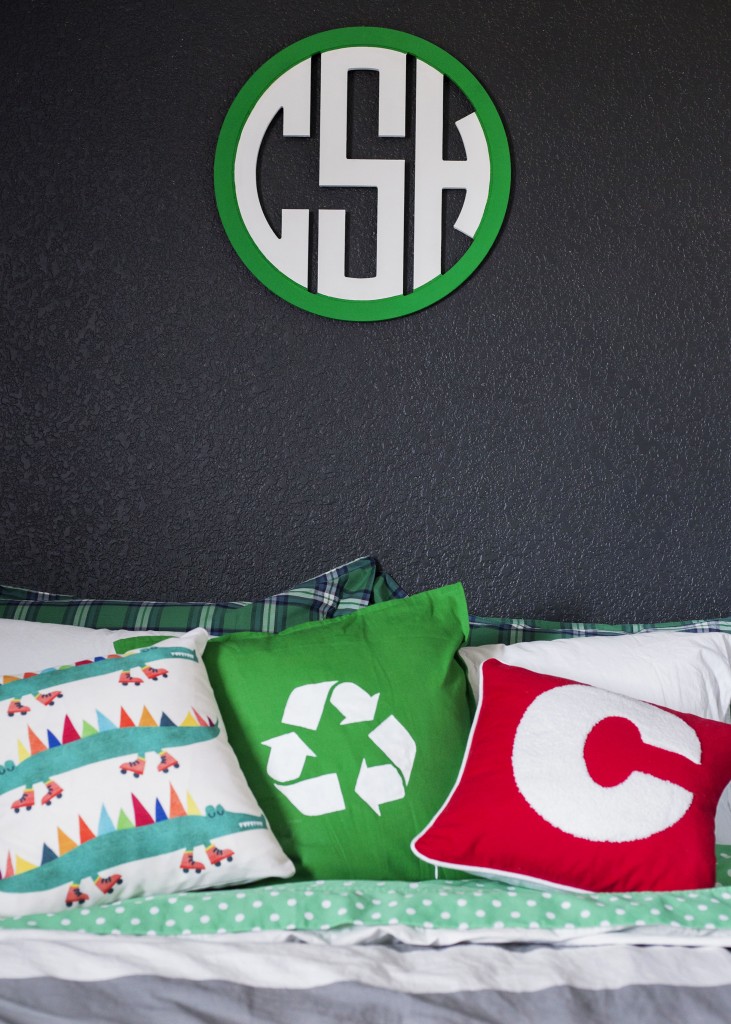 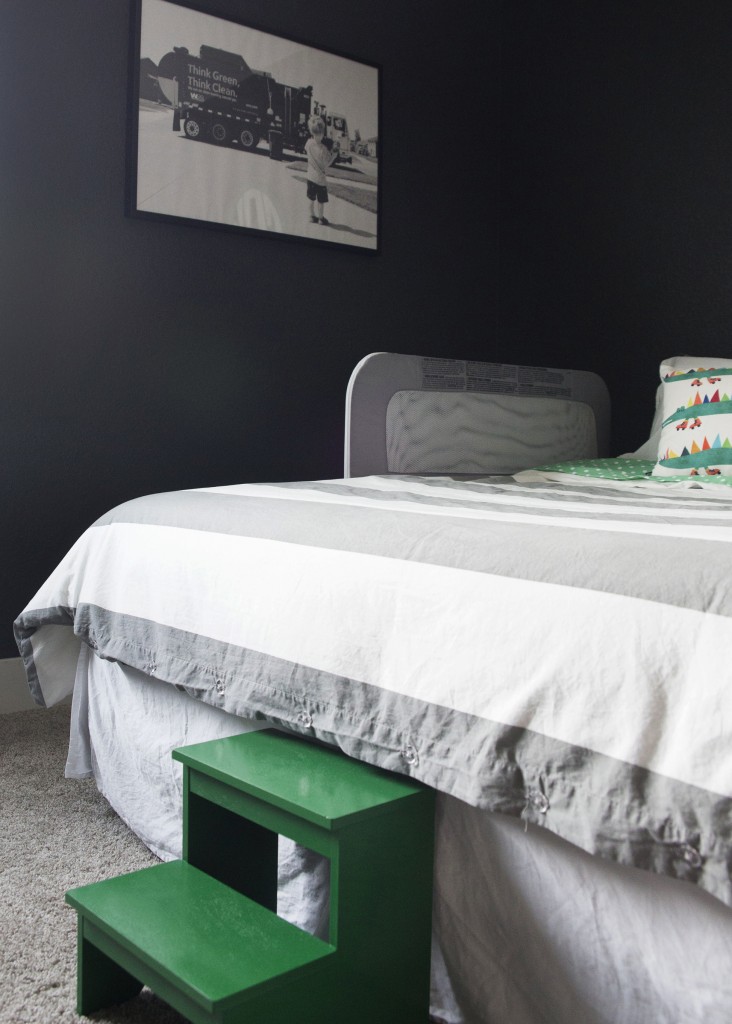 I tried not to invest too heavily in anything specific to garbage trucks, thinking ahead to when he’s onto the “next thing” …although I can’t imagine that day now. I have videos over a year old on my phone from him captivated by the garbage truck. It’s been a nearly lifelong love affair for this nearly two-and-a-half-year-old. 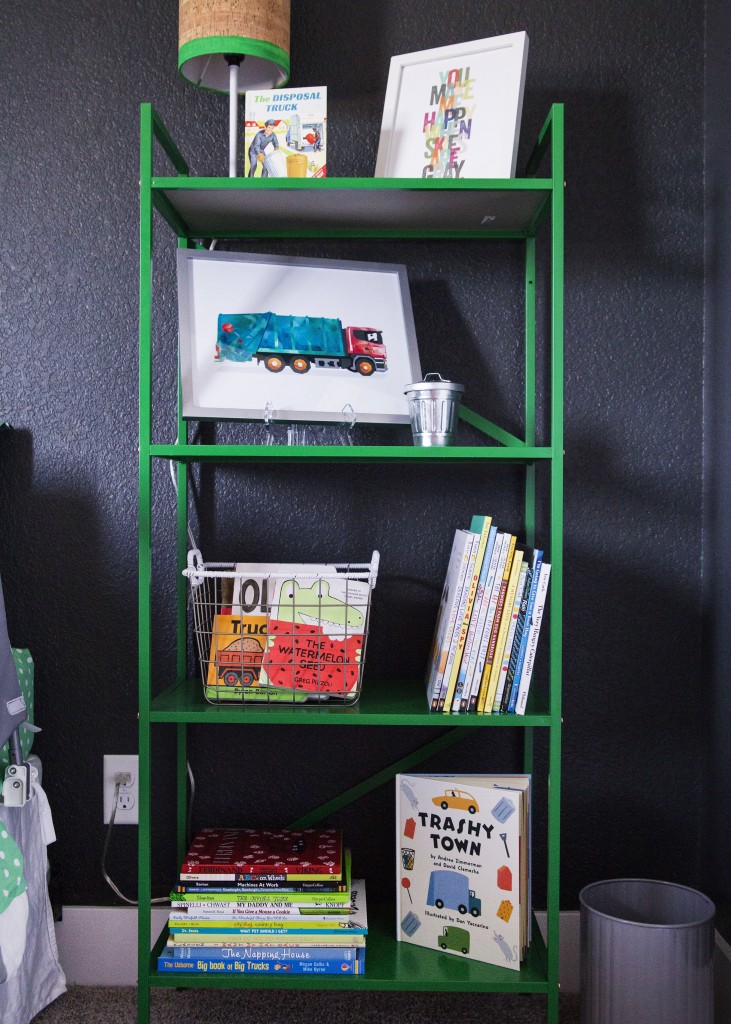 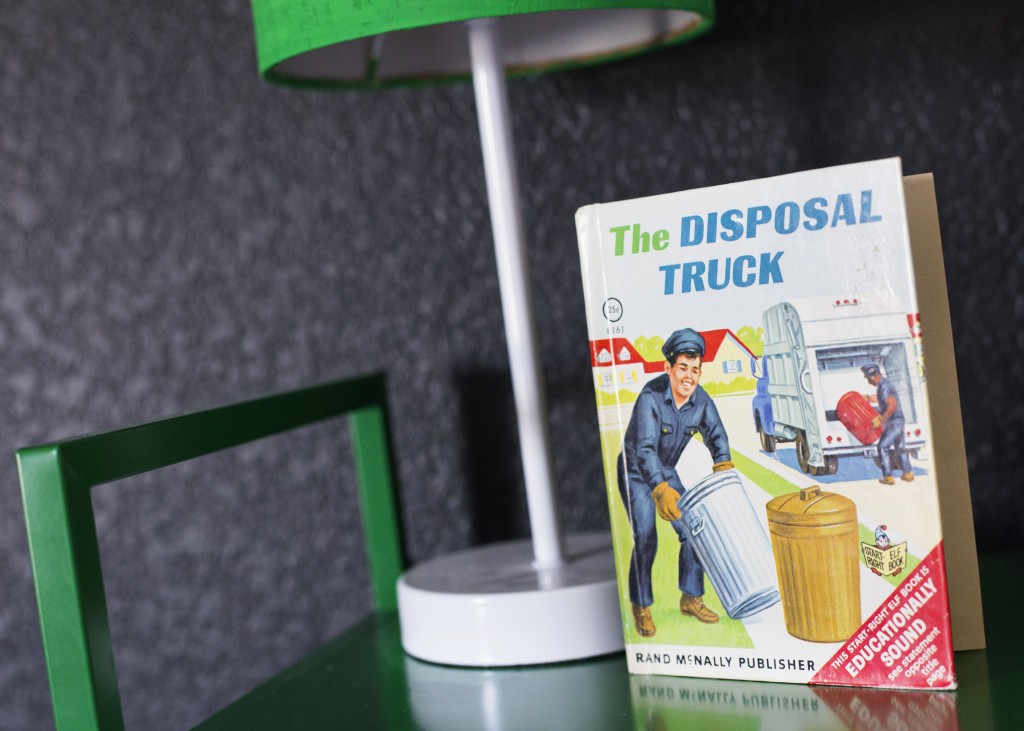 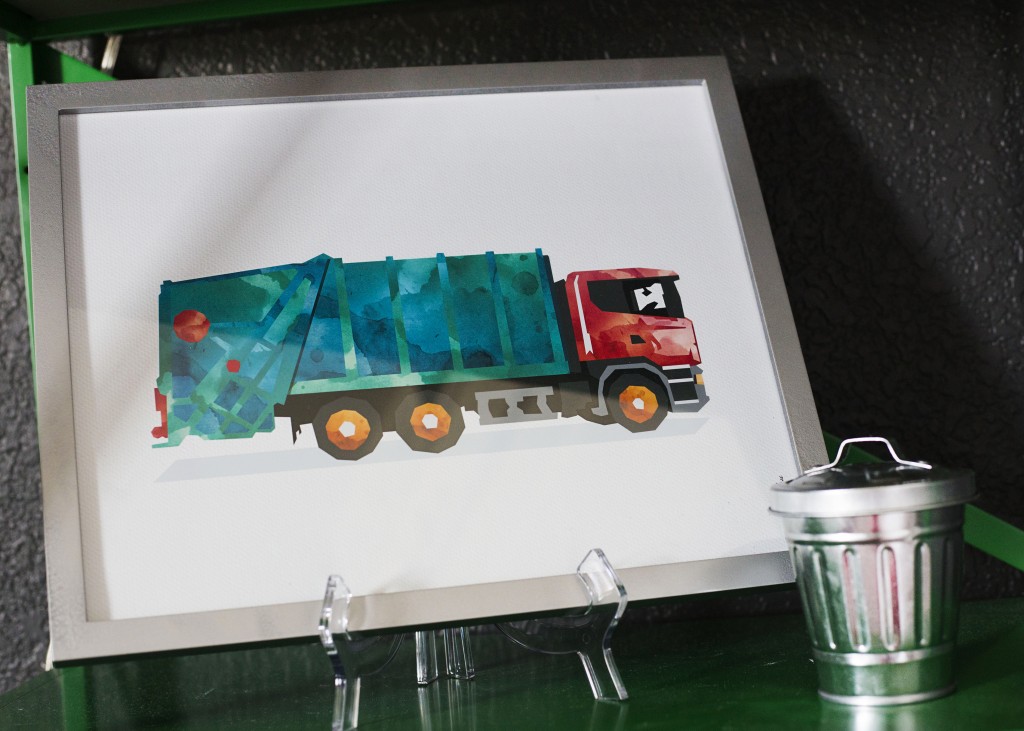 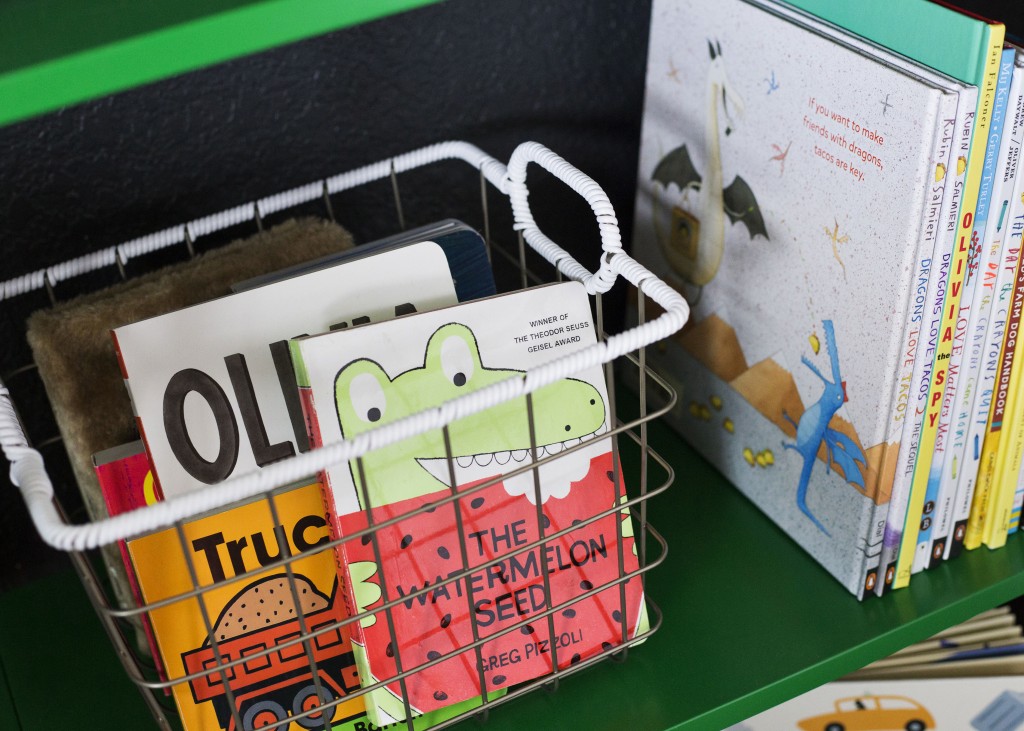 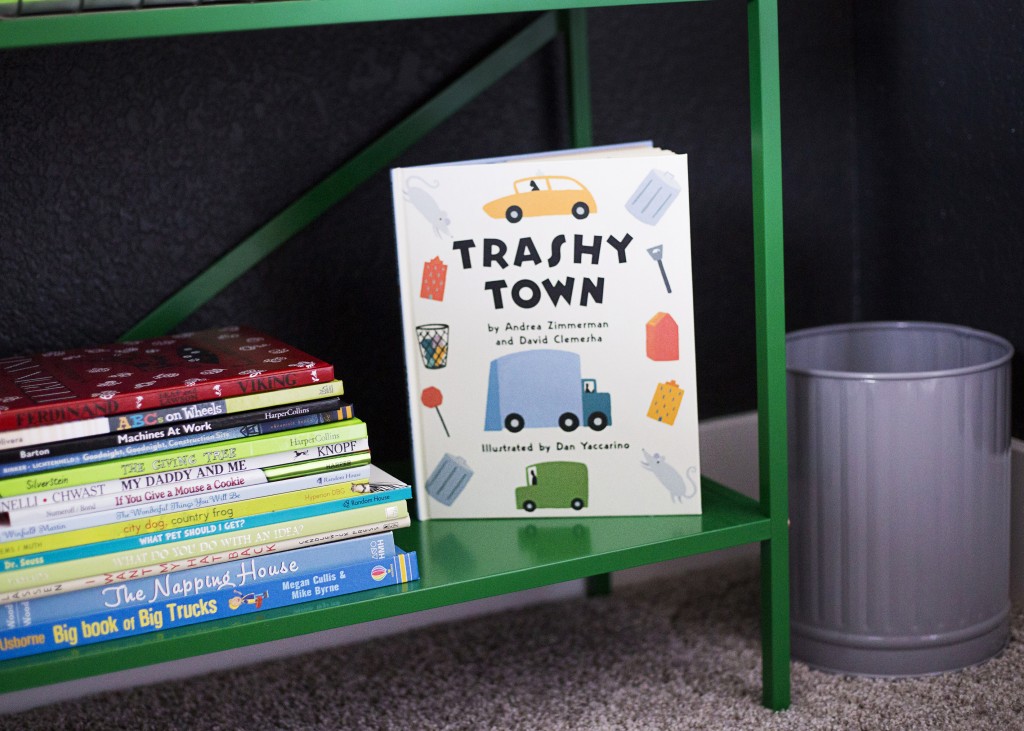 It was fun to share the final room with Crew, who saw the progress as it happened — furniture being moved in, crib being taken down, etc. But I waited to hang and place all the little details until one mad-dash evening before bedtime, so he could walk in and see the whole effect. He had no idea it was going to be a “garbage truck room” and it made me so happy to watch him gasp and grin and count them as he found them around the room. 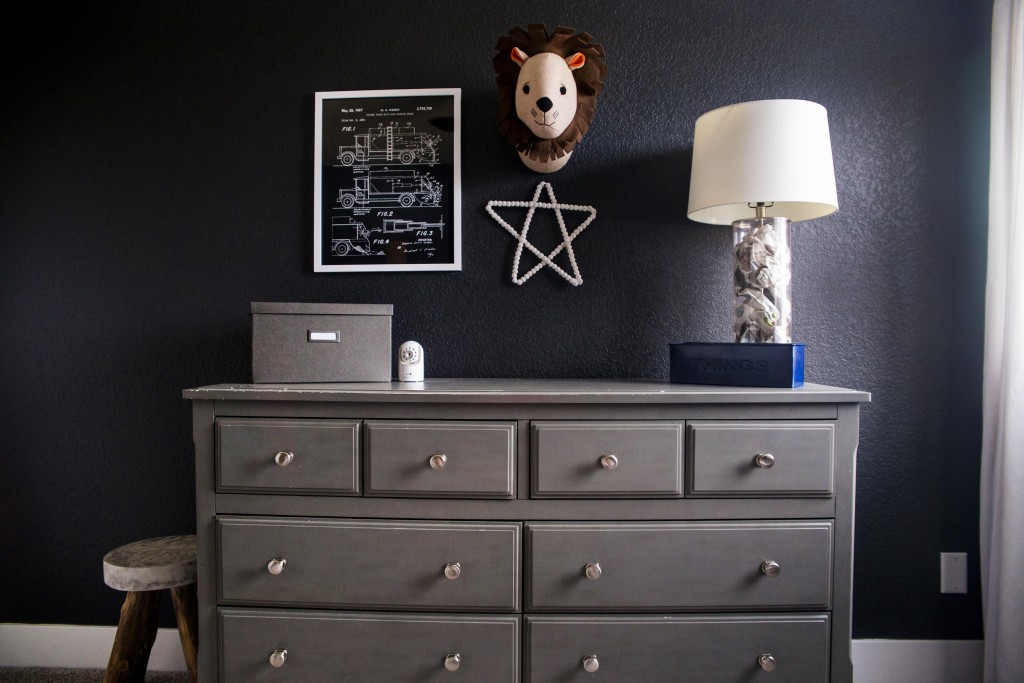 (Cut to me trying to shoot this wall, and Crew pretending he’s important and walking in front of my camera chattering away on a toy cell phone *eye roll*) 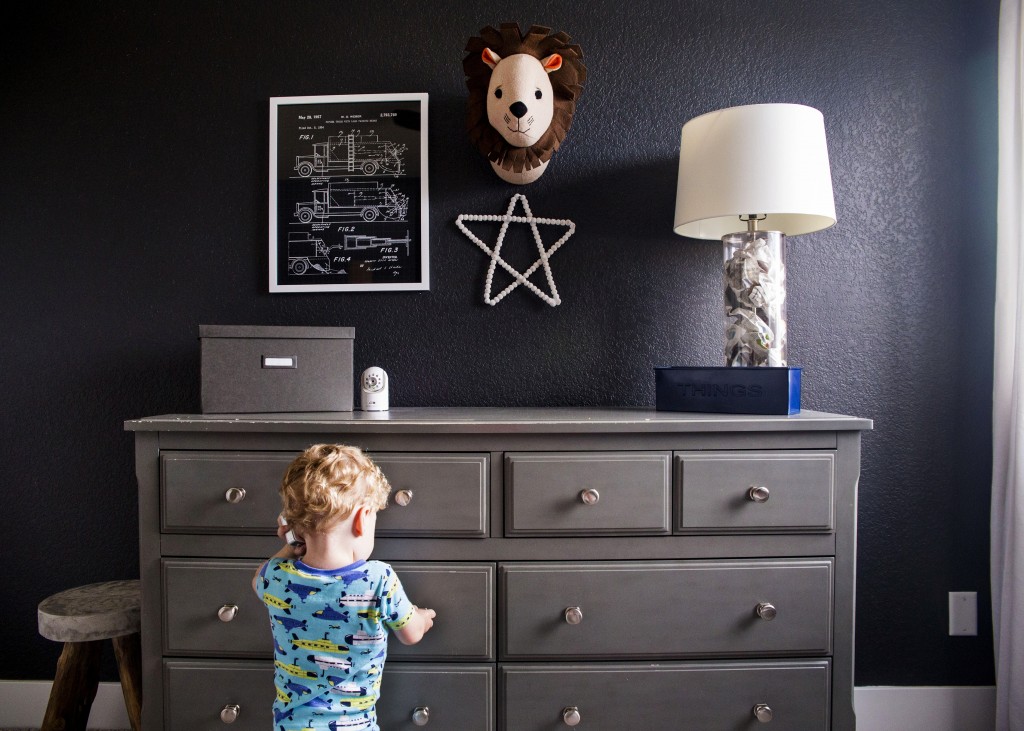 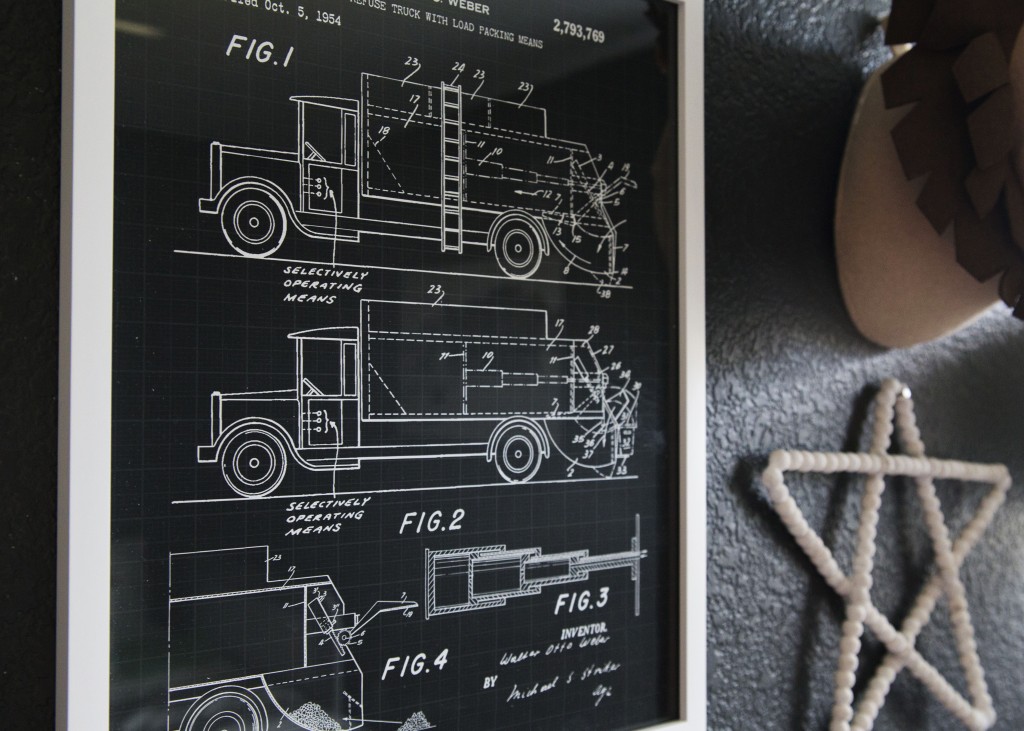 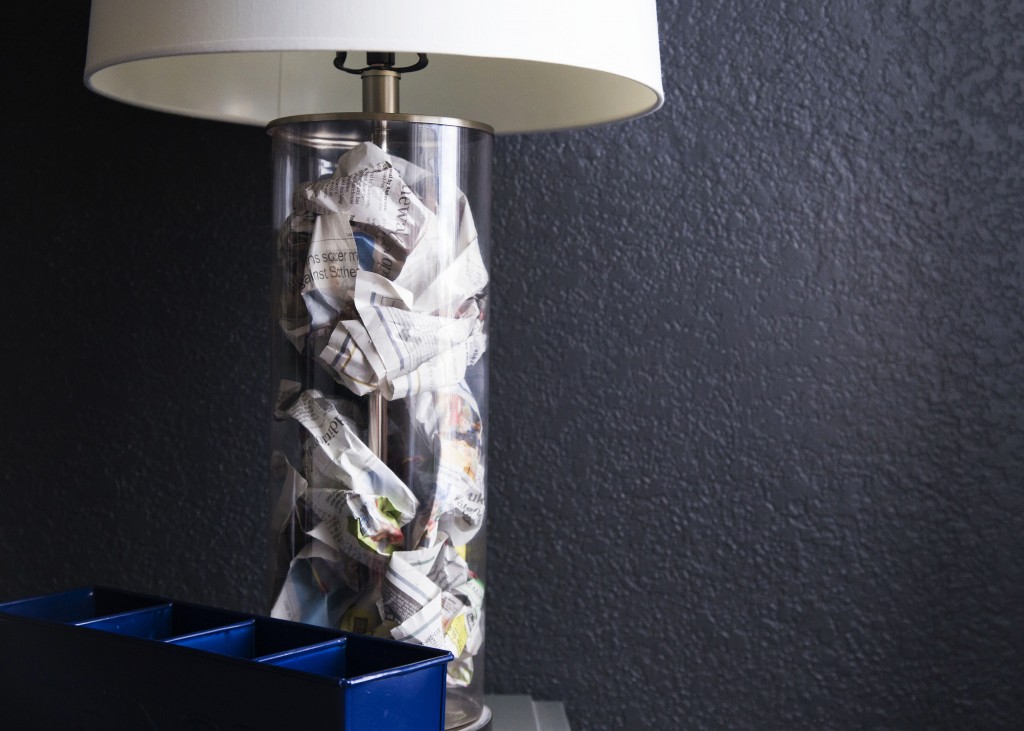 The “trash in my lamp!” was a big hit, as was the 3-foot-wide engineer’s print of him with “his” neighborhood truck. (A fun and different way to print your photographs — send to Staples and for around 3 bucks, you get a gritty/grainy effect black/white large scale print.) 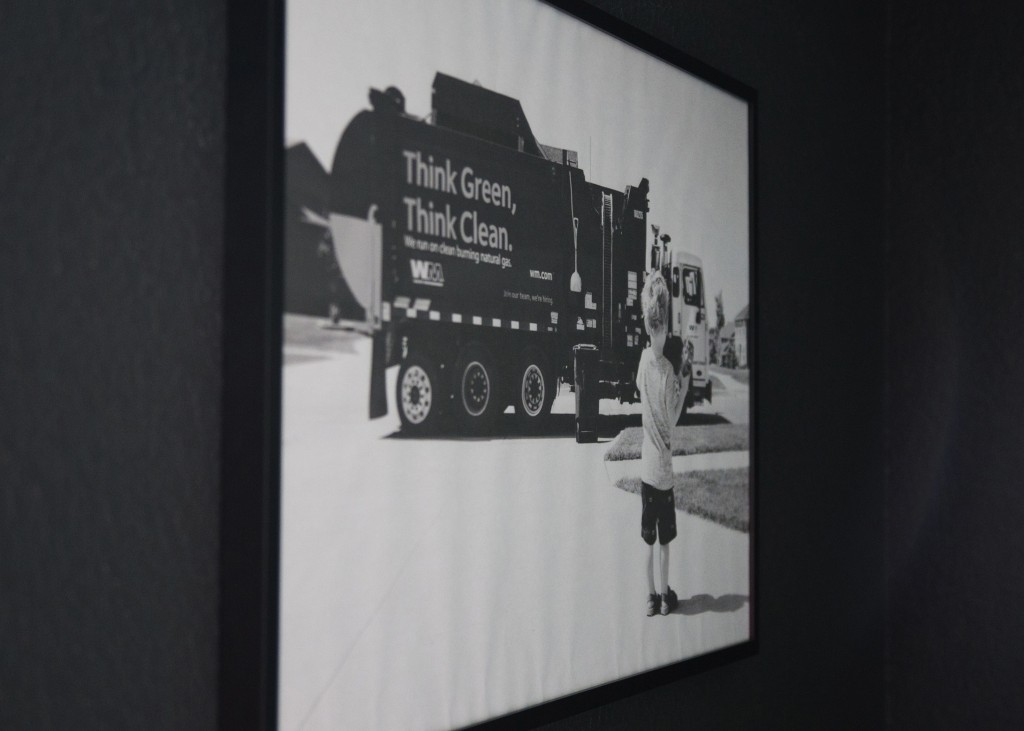 The thing I didn’t quite foresee was what a hit the little vintage book would be — I like to incorporate something vintage in each room of our house, and I thought this would serve as charming little decor detail if nothing else. Turns out we’ve read it (multiple) times daily since it appeared on his shelf. I love that Crew refers to it as his “new old garbage truck book” after I explained he had to be careful with the pages! 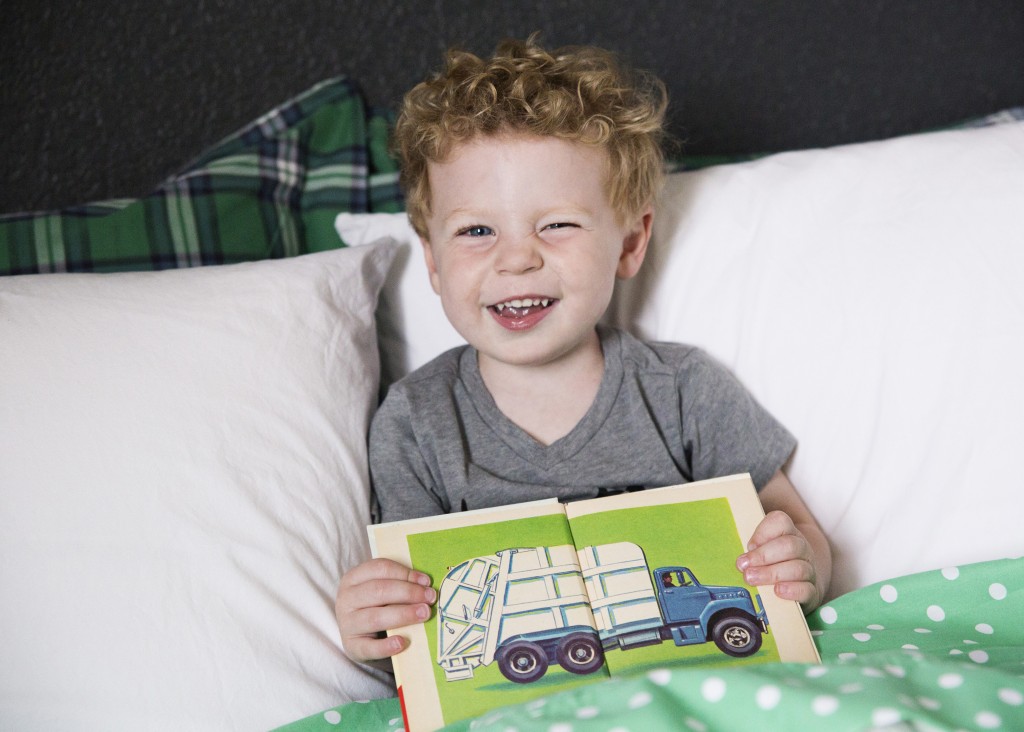 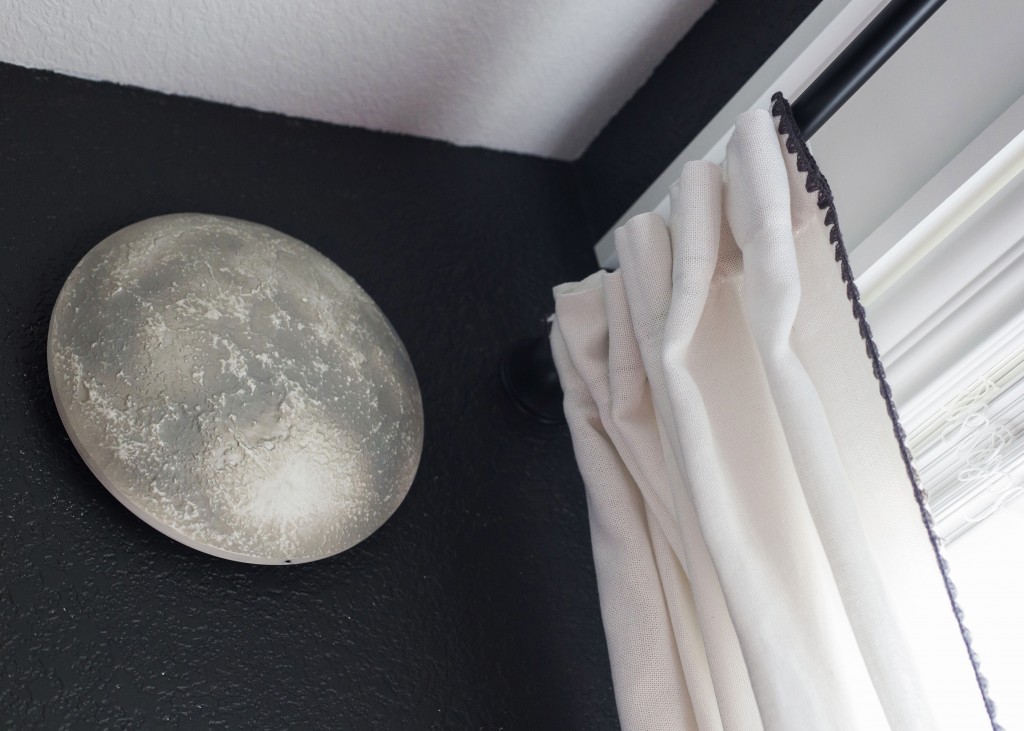 Garbage trucks aside, we brought in a couple favorite animals — a lion (his favorite to see at the zoo) and a crocodile on one of the throw pillows. The stars and the moon are also both a big hit in his world. I liked Page’s idea to put the moon up high near the window, as opposed to my compulsive need to make everything part of an organized grouping in the room, and I love how it (and the wooden star) look against the night sky paint color. Some glow stars on the ceiling were the final touch. 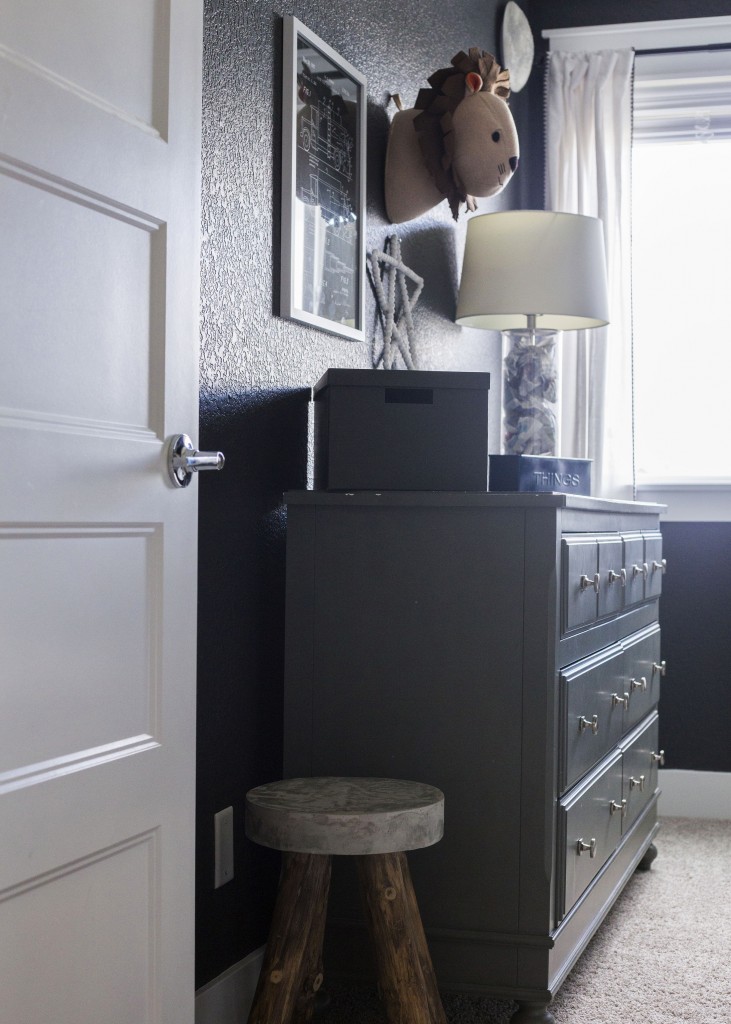 I was able to reuse quite a bit from his old room without it seeming babyish, as well as several things we already had on hand around the house. The corrugated metal letters were in his first room and seemed like a natural fit (he thinks they are made “out of trash cans”) and the concrete and wood stool is less a side table now and more a perch for a certain someone to look out his window (for what else…the garbage truck, whose route he can now see from this room!) The duvet we had on hand from when this room was still a guest room. I added a stripe of green paint to a cork lampshade from his nursery, spray painted his previously aqua “Things” bin to navy, and used white fabric paint to add a recycling icon to an Ikea pillow cover. A swap of hardware on his dresser (previously changing table) gave it a little facelift as well. 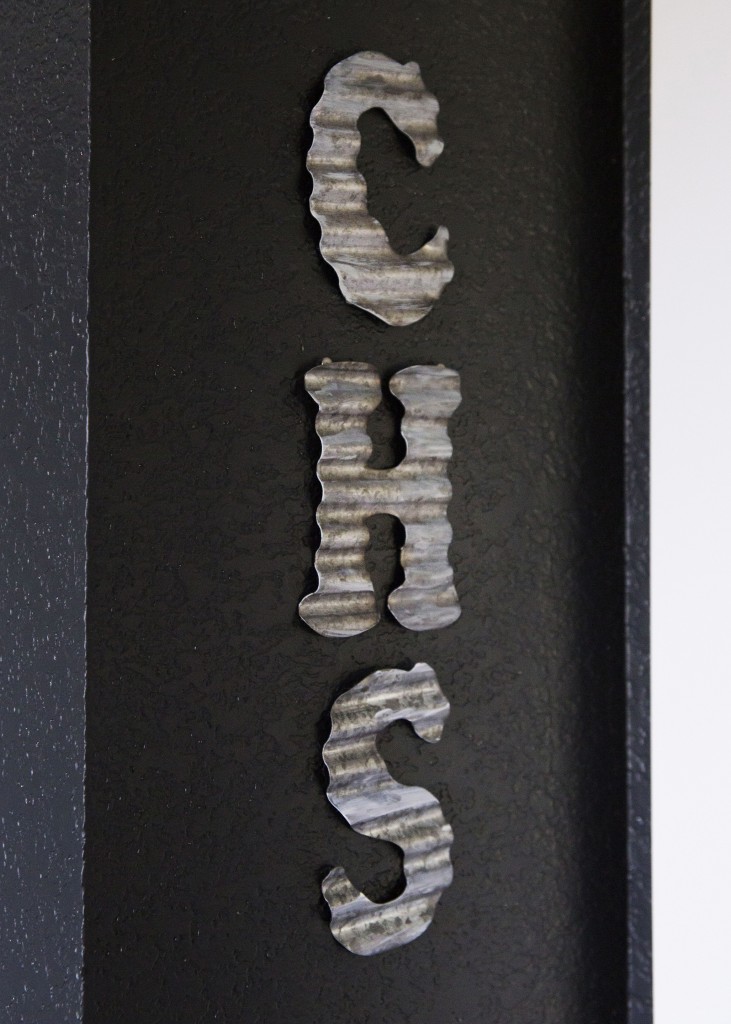 I’d still like to find a headboard, but haven’t come across quite what I’m looking for yet. I’m waiting until we’re less in need of the bedrails before adding a nightstand (too many sheet-changing obstacles!), but I like the idea of this one that would match his shelves. I considered these a couple times, but ultimately we don’t store much besides books and clothing in his room (toys and more books are both in our loft playspace outside his room and, soon, in the basement playspace). 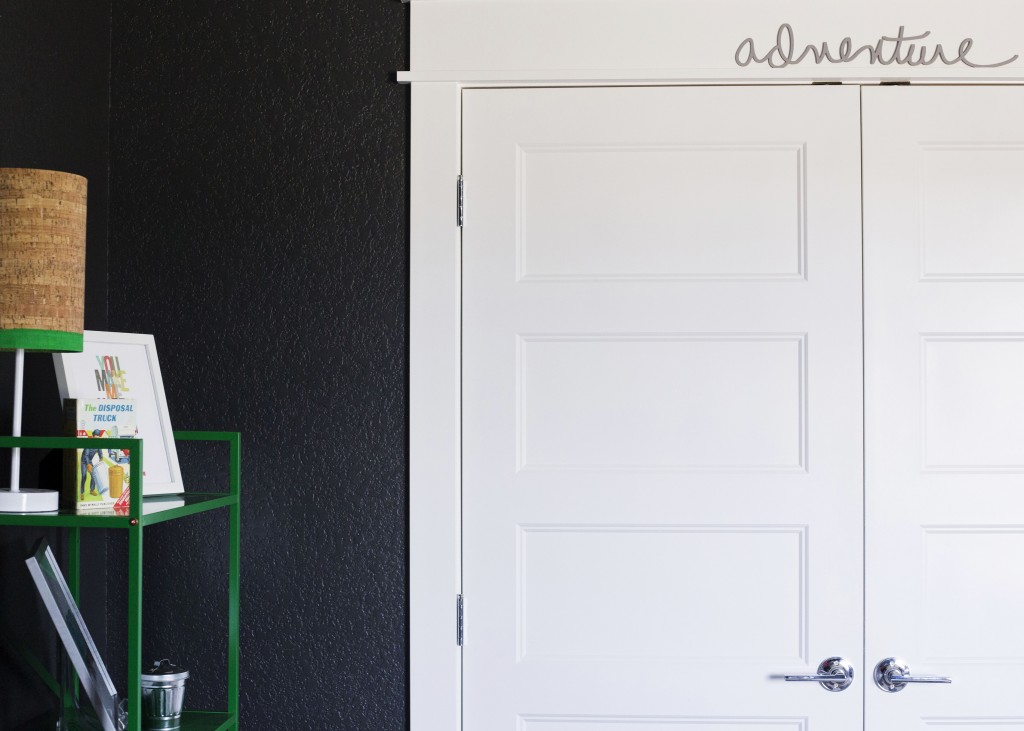 No room tour would be complete without me patting myself on the back for cleaning out both rooms’ closets. Actually swapping the rooms around forced me to go through everything and move out the baby stuff. Hello, big boy closet space: 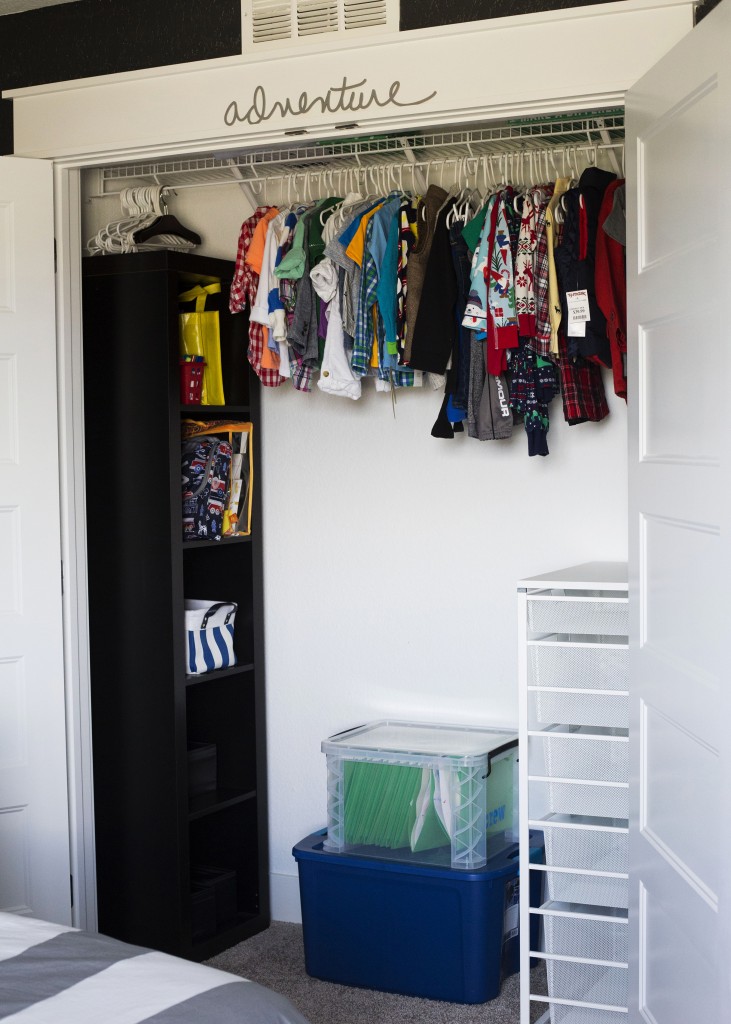 Thanks for checking out this little garbage enthusiast’s new digs! 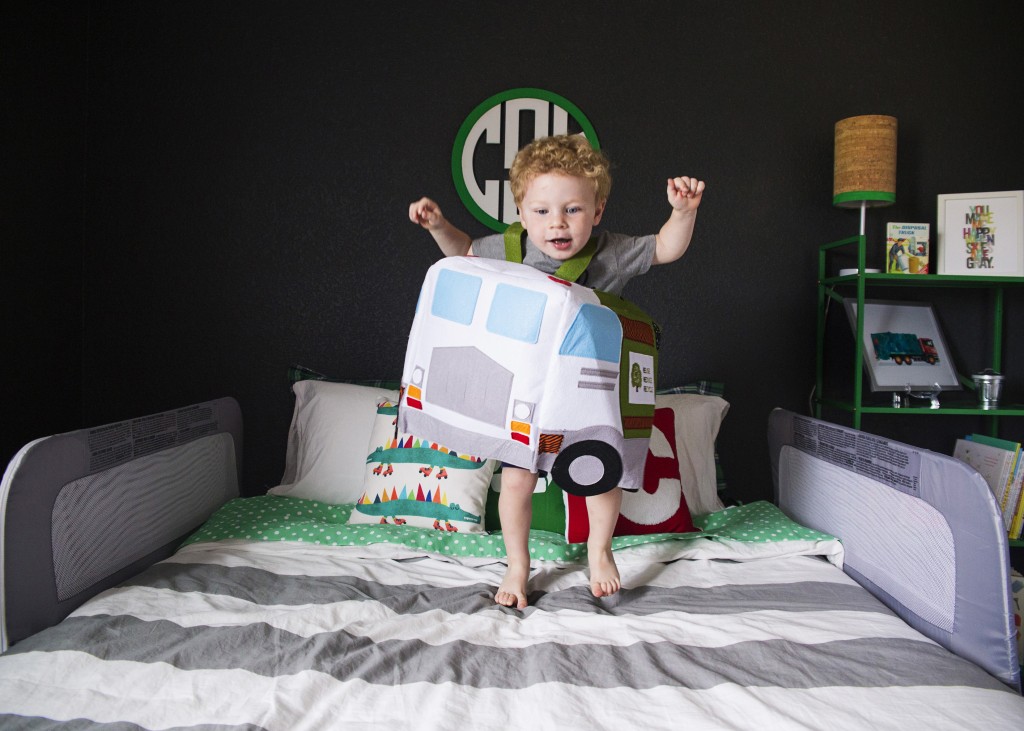 Wishing you many happy memories in here, buddy, and lots of sweet dreams. 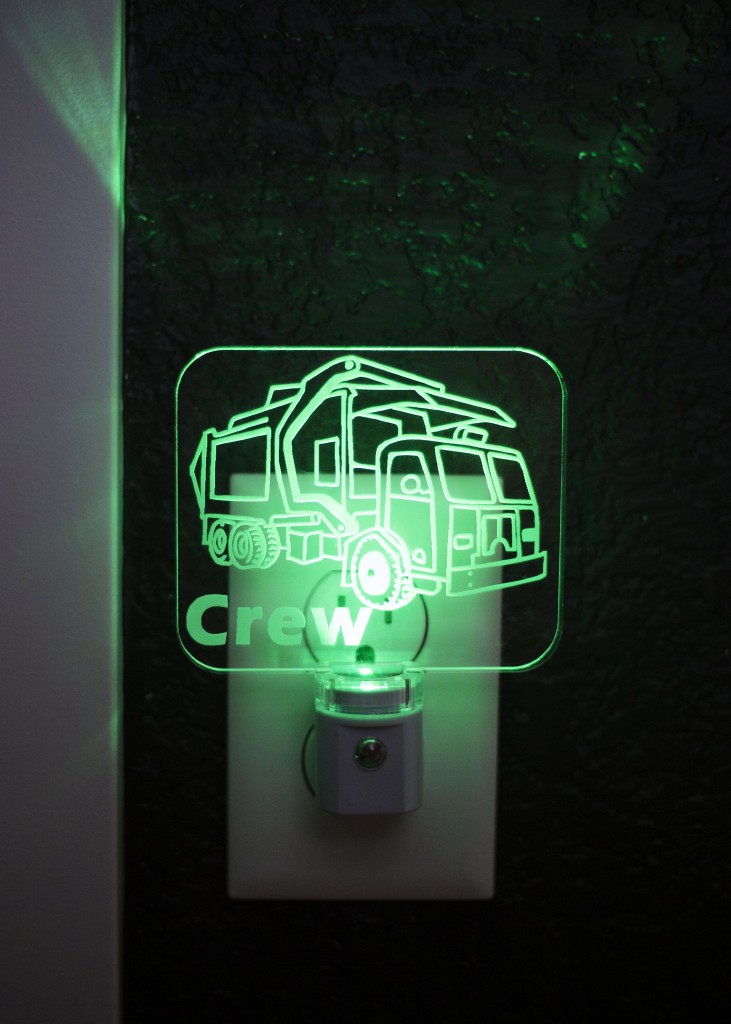