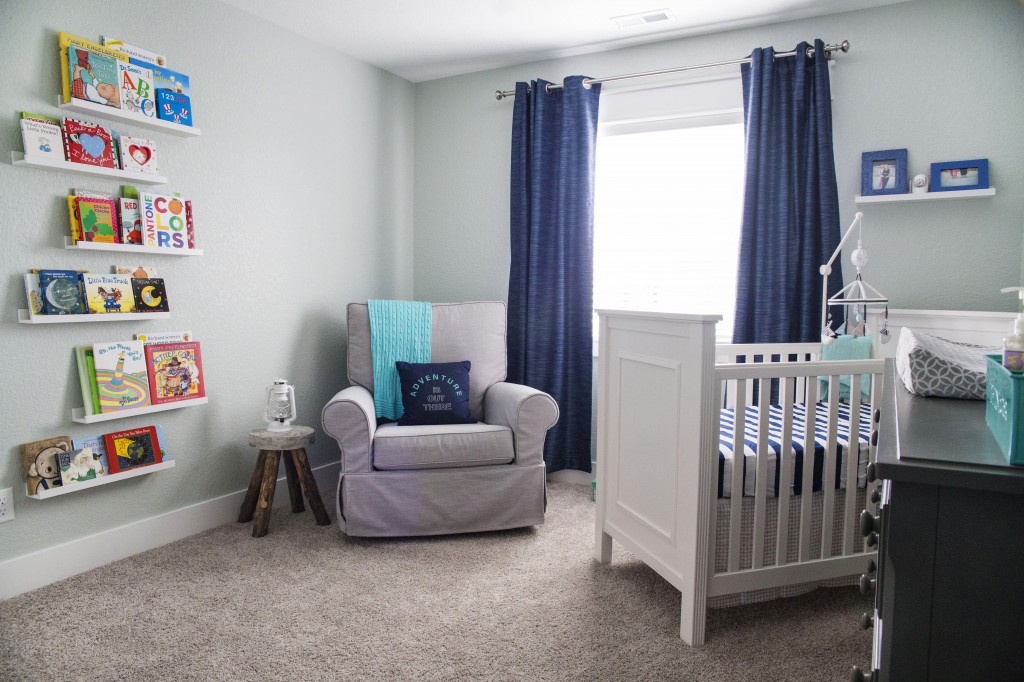 I’m so excited to finally share some pics of Crew’s nursery. This room has posed a couple challenges, but it has been so much fun to pull together. I think every mama-to-be pins away, dreaming about how to decorate her baby’s room. I didn’t want to be OVERLY theme-ish in here, but put together some inspiration and a color palette that works with all things water/adventure (and a nod to his name!).  Since I didn’t have a room to work in until he was over a month old, I decorated in my head until I could get in here and bring it all to life! 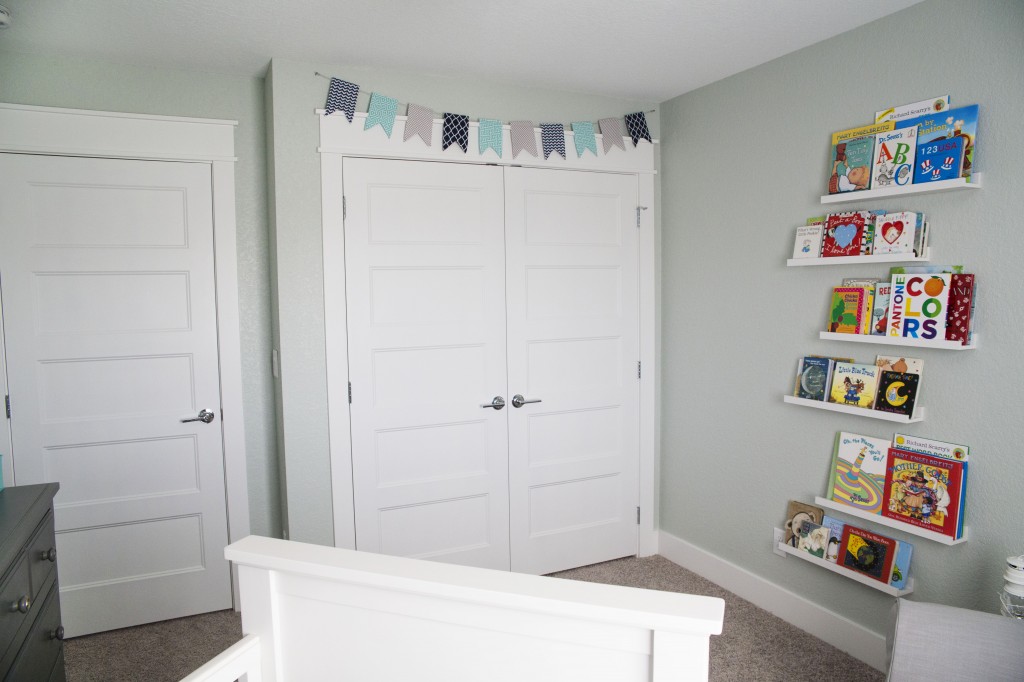 Decorating without the actual space to reference meant there were a couple of surprises. Like it hadn’t clicked for me that when considering wall space and furniture arrangement, I forgot that his double closet doors weren’t the folding kind — they were full size, swing-open doors. I love that style so much more, but man, it eats up some space along the south wall! 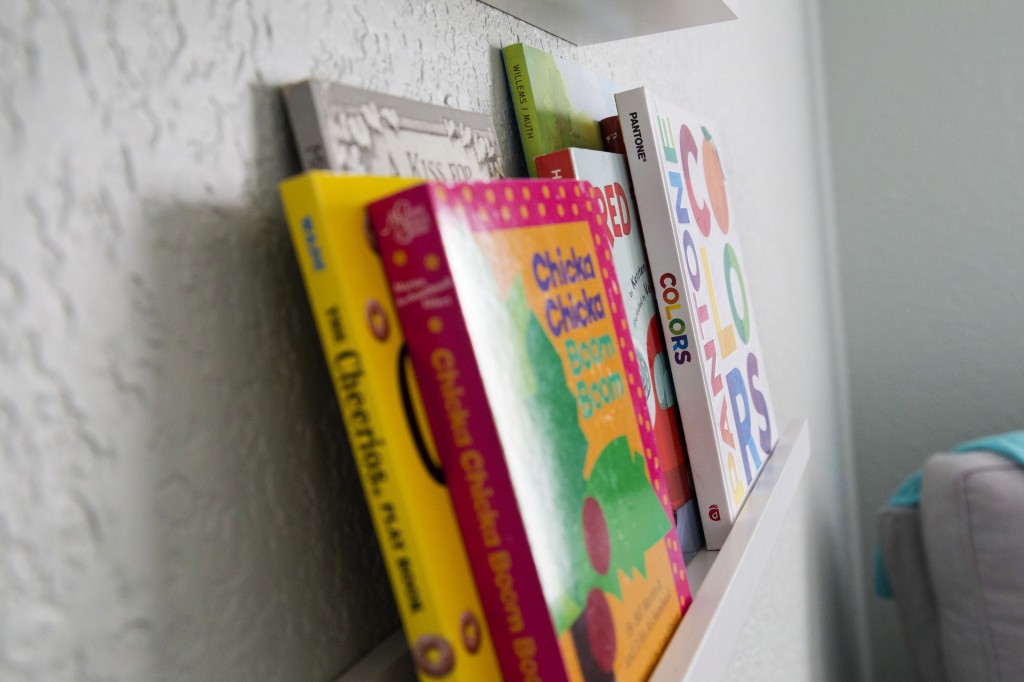 So instead of a traditional bookcase, we opted for the popular picture-ledges turned bookshelves option, gifted by Crew’s Gigi, on this wall the closet door opens to. These book ledges make me so happy — so much color for him to look at and wonderful to see the many titles gifted to us by friends and family…and without taking up floor space! 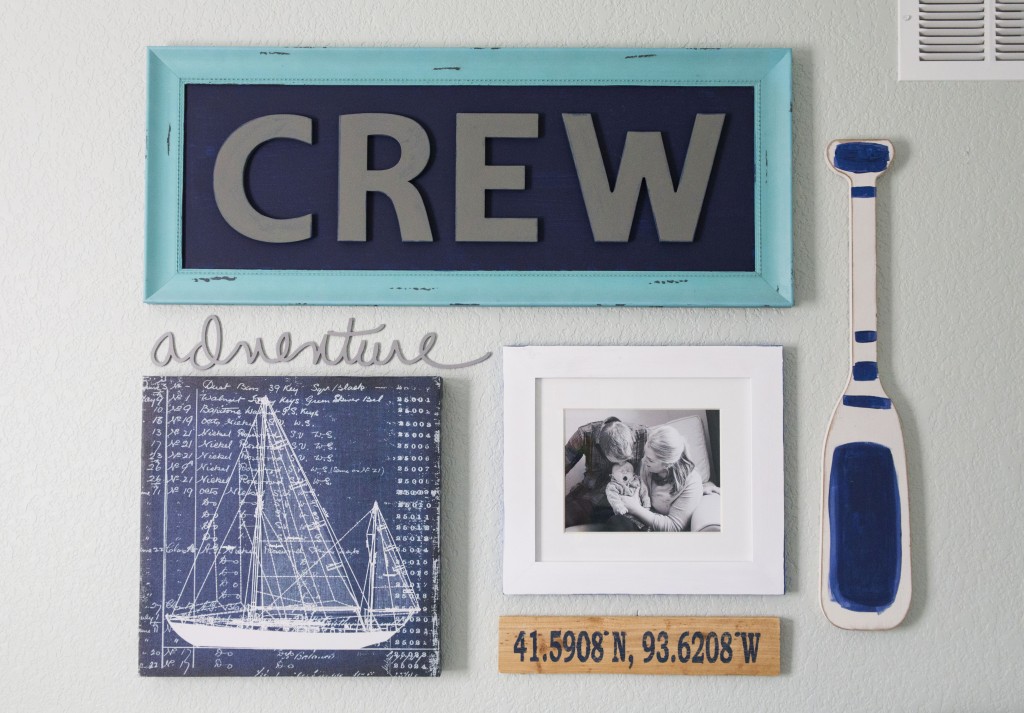 I used the months of pregnancy to collect things for an arrangement to go over his changing table/dresser. The “adventure” word I purchased before Crew was even on his way when we deemed it our word for the year in 2014 — it seemed more than appropriate it hang on his wall, as he is our greatest one yet. The coordinates on the plaque are those of the hospital in which he was born, the frame holds a first family picture, and the paddle was a must as a nod to his name. The paddle originally said “beach” and was a different color — I added the royal navy paint to it and the exterior of the white frame to tie it all together a bit more. 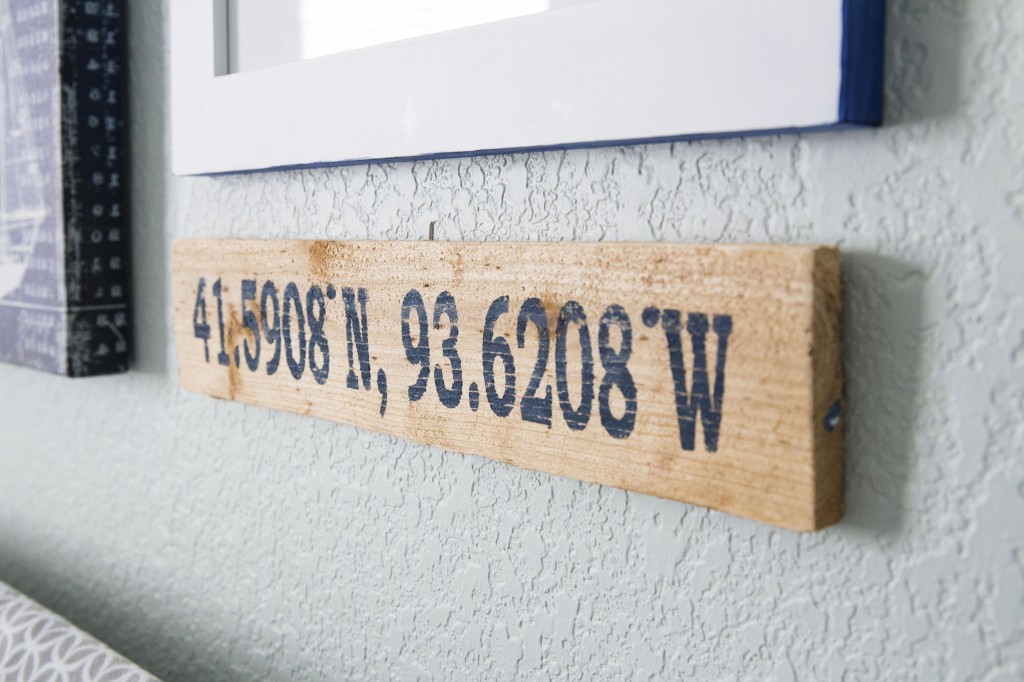 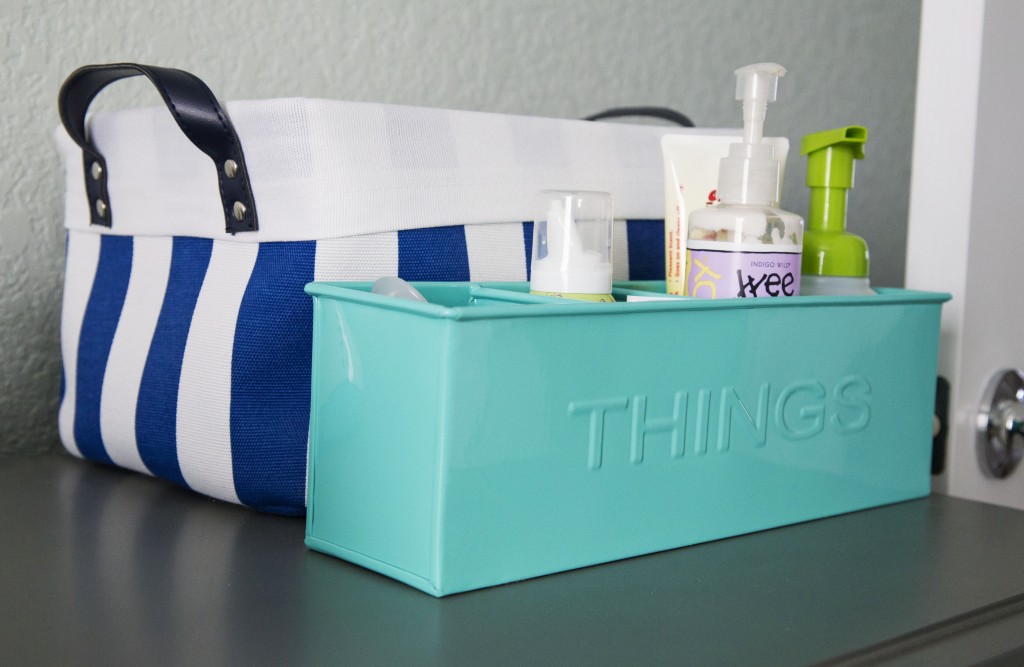 And finally, the crib. Which has been sitting flat-packed in a box for a few months in the apartment, until we could move in and put this together. Crew was about six weeks when we got to finally, FINALLY do this parent right of passage. It was like delayed nesting and as silly as it sounds, I teared up when we finished putting it together. I’d been waiting so long to feel what his room would feel like, and standing in the space, finally seeing the focal point of it put together, was an awesome moment. It was kind of like bringing him home all over again, but to a much more zen, nested, space! 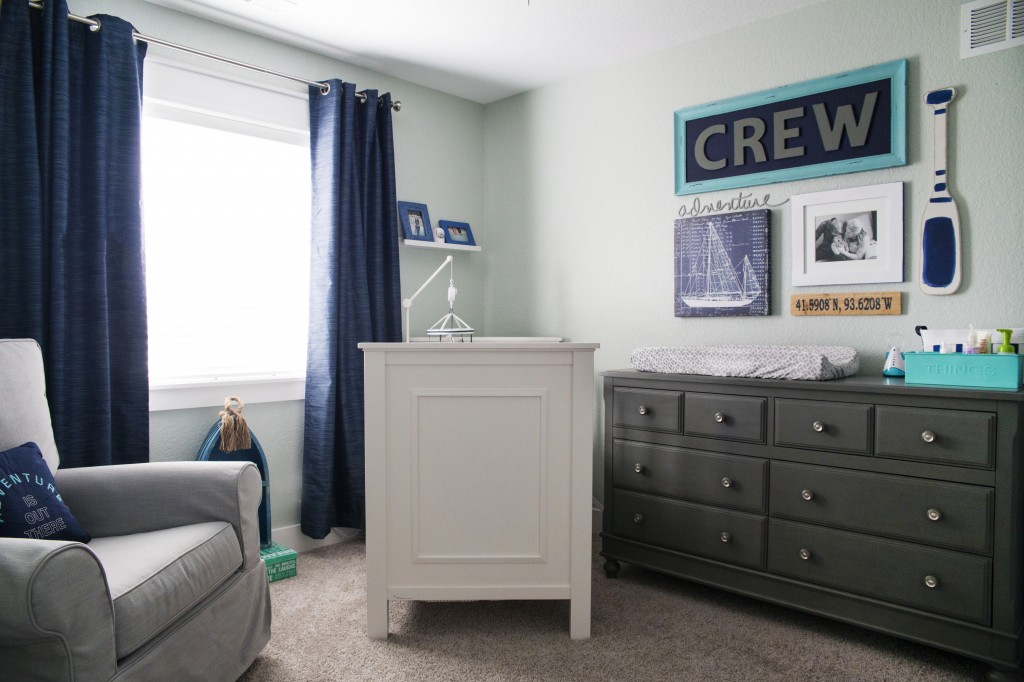 The mobile that started it all. Page fell in love with this on a post-dinner date at PB Kids one night last summer, before we even knew we were having a boy. #meanttobe 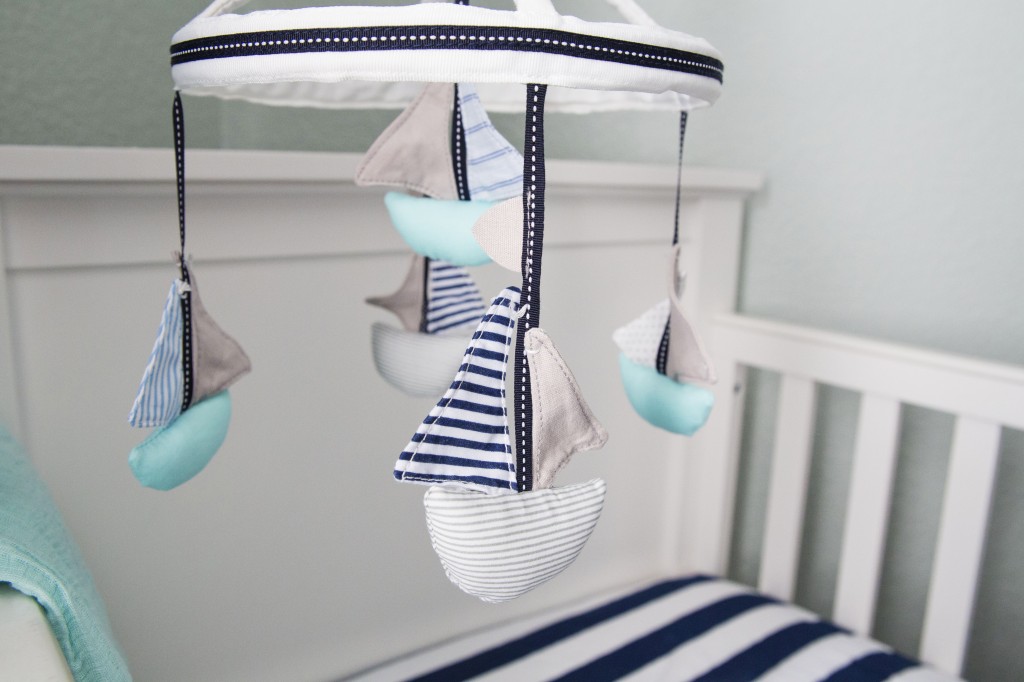 True story – I agonized over which crib sheet to use for pictures. I’ve gone a bit crazy with them, since it’s the only bedding you can use with a babe. We cycle through so many cute ones – this striped one, a super soft navy chenille, an aqua with navy flecks, and the list goes on. We couldn’t quite fit the last book ledge on the other wall, but it’s perfect in this corner, to hold a couple of favorite maternity pictures in which we first revealed his name, and also holds our monitor camera. 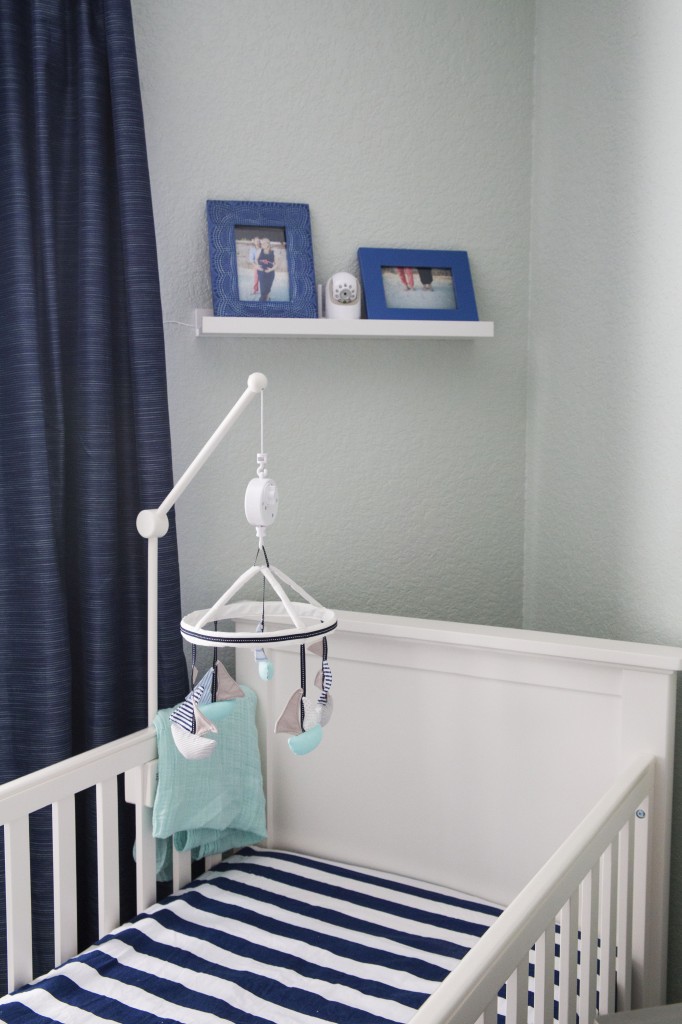 My bestie spotted this pillow while I was still in the inspiration board phase. Perfection. The cable throw was a gift and the perfect shade of aqua. 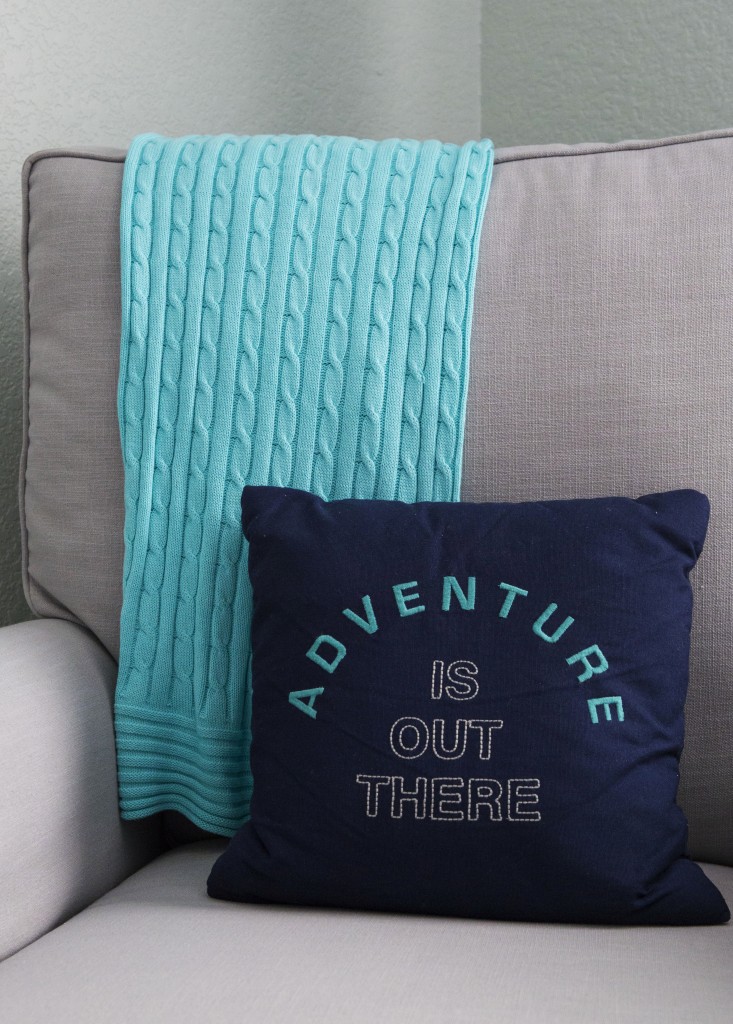 In the months from when we ordered our glider last fall and when it arrived at the house in February, I had lost perspective on just how large it is! We chose it for many reasons, one of them being its oversized comfiness, but until it was in the room (and we had to allow even more perimeter space for swivel/rock room), I hadn’t realized just how much floor space it would eat. But this sucker has been my second bed during the sleepless nights these last months, so we found a furniture arrangement to accommodate it! 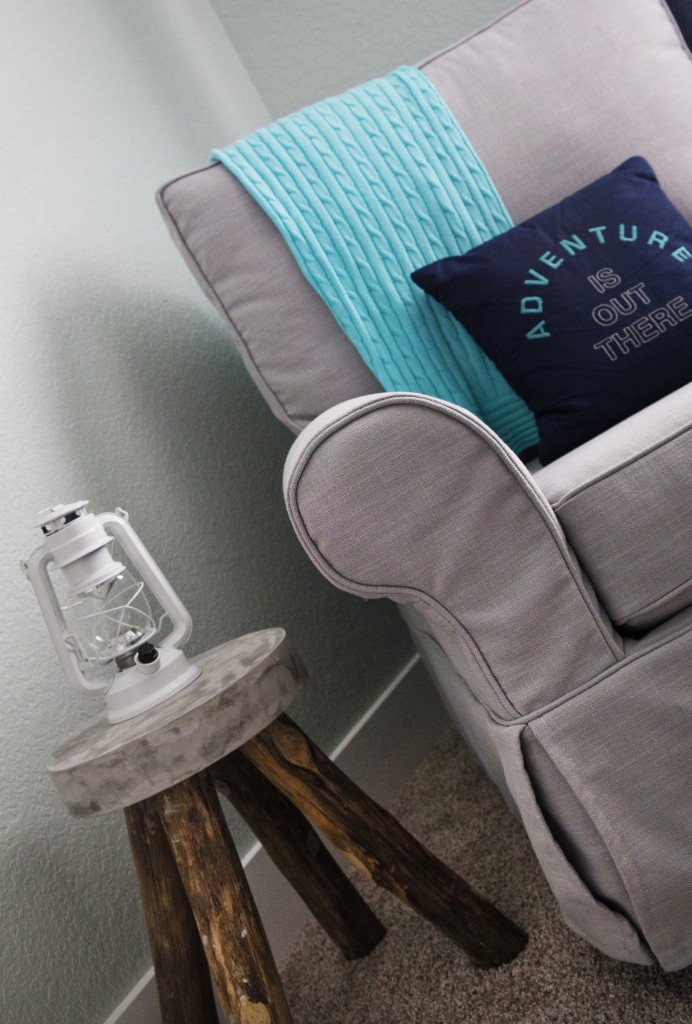 Next to the glider is a little nightlight on the most perfect table, from Crew’s Mimi. I love the size, the textures and colors. The legs just scream little boy “adventure” room to me! 🙂

I’m already dreaming of what we’ll do when he’s ready for a “big boy” room and has opinions of his own, and later on, creating a cool teenager space. Until then, this sweet smiley boy of ours finally has a finished space to call his own. 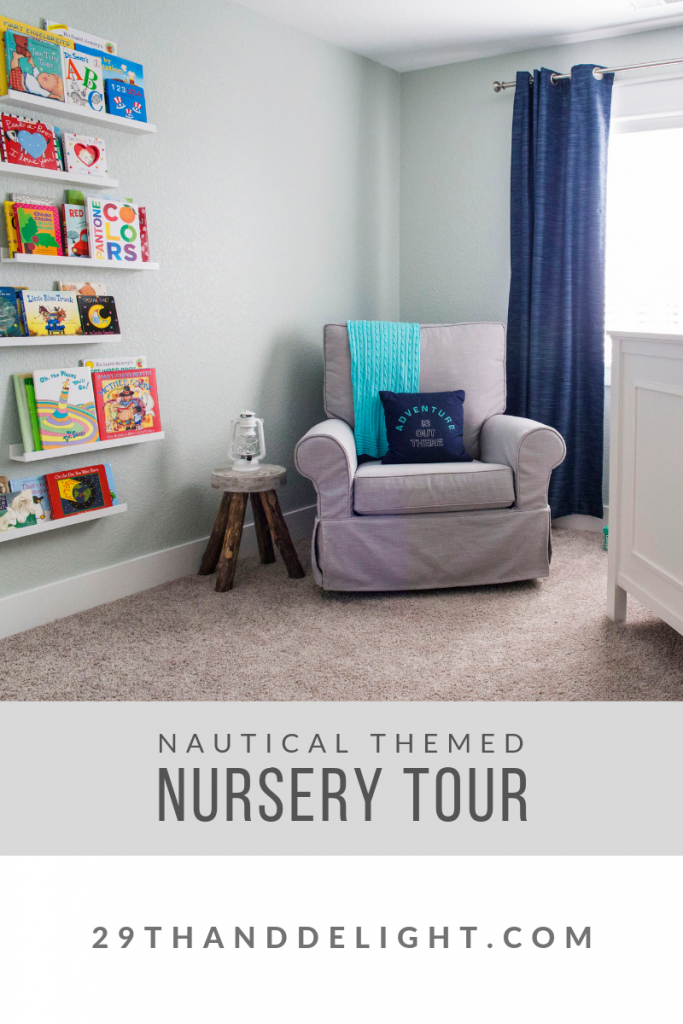