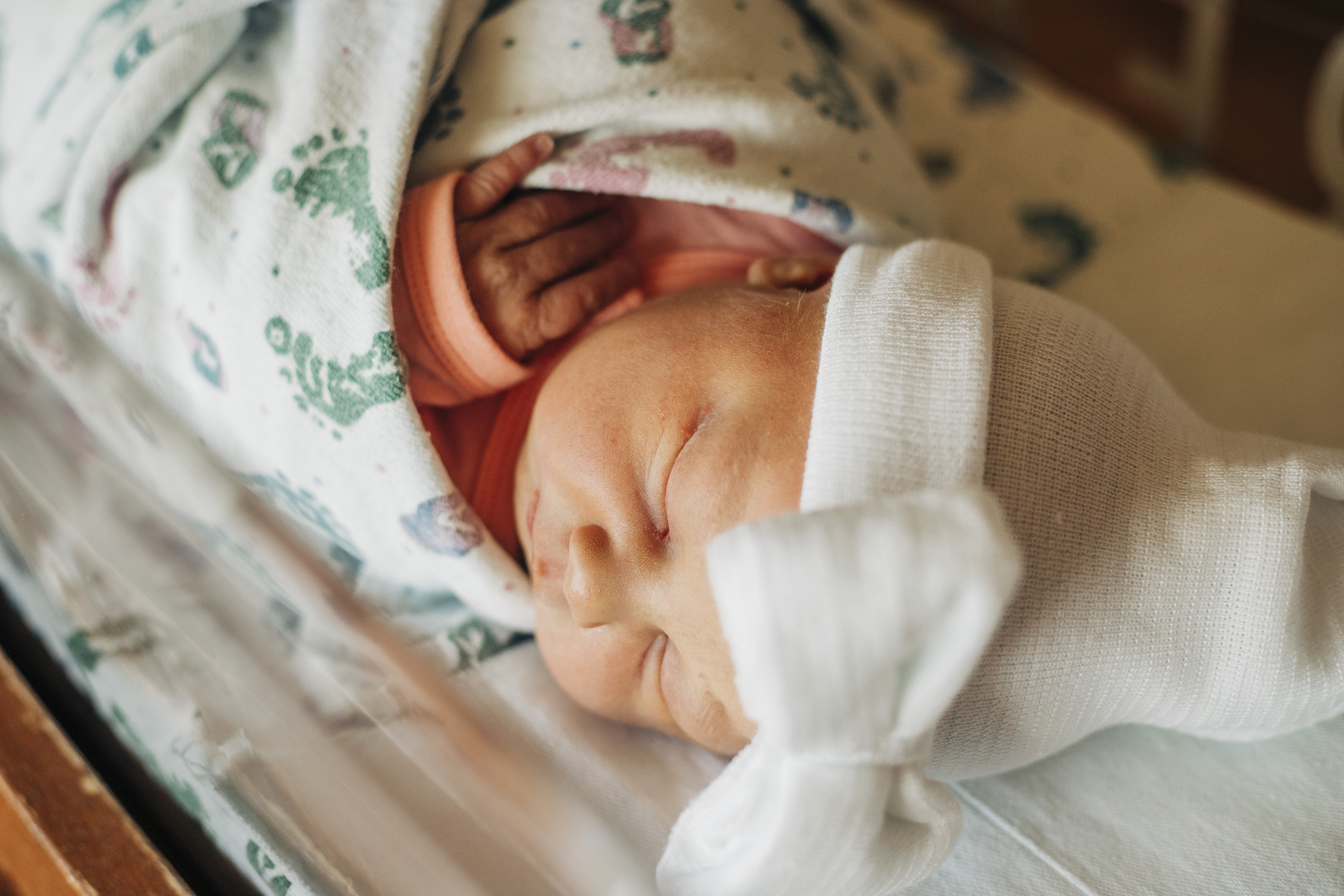 A complete opposite of her brother’s arrival, I knew, to the hour, when we’d be checking in to the hospital for Greer’s delivery. I’m not sure I would have opted to induce before the 40 week mark under normal circumstances, but as we all know, mid-April 2020 was anything but normal. I was of “advanced maternal age” this time around having just turned 36, Greer was cooking perfectly well, and in the interest of getting in and out before predicted hospital rooms “peaks” in the coming days, we opted for induction at 38 weeks, 6 days.

In the middle of so many unknowns and so many changes to how I thought things would go (including finding a place for Crew to stay when my parents couldn’t get back from Florida due to both cancelled flights and closed accommodations between here and there), I was grateful to at least know when this would happen, and that I’d be with my favorite OB from the practice, who had overseen the majority of my visits (the last several weeks of which had been just she and I since no visitors were allowed). I know she sensed that I needed something to go as planned so she booked me under the wire of 39 weeks so we would be on her hospital shift that week.

We dropped Crew off at our friends’ house for a sleepover (his first!) and it all felt so novel to be inside another family’s house after weeks of everyone keeping to themselves. If Crew was nervous to stay on his own, he never showed it and the excitement to play with friends both took over, and wore him out. Once I knew he was set, I was able to relax a bit more and focus on kid number two. We drove to the hospital laughing at how different this experience already was, and remarked for the seventy-fifth time how relieved we were to know we were both free of any symptoms or reason to not both be allowed into the delivery room — something we had been stressing in recent weeks.

Everything felt SO relaxed and familiar as opposed to doing this the first time around. Even though I knew it could go a hundred different ways, I still knew in so many ways what to expect, and again the lack of people in the past weeks made chatting with our nurses and doctors feel like a long overdue social hour. I remember it was SO quiet and there was the added step of going through security this time around, but I was very aware that it felt as if everyone was going above and beyond to keep things feeling light and happy. It was actually still so early in the pandemic that non-medical professionals didn’t yet have masks, so we were never asked to mask up – there were no spares to offer us even if they wanted to. In fact, the day we checked in was the first day the medical staff had been assigned face shields. But despite the added layers between us and the people around us, I kept feeling waves of relief, for all different reasons, wash over me and I can honestly say I wasn’t the least bit nervous. We were so ready to meet our girl.

We checked in at 4:00 and by 5 they had broken my water. I think they gave it an hour or so and when not enough progress had happened, they moved to pitocin. Contractions picked up after that and in the interest of it being a second baby, they advised that if I wanted to do an epidural, to order it sooner than later. I would guess that was maybe 8:00 and by 9 we were both kind of drowsy and decided to close our eyes. Page was SNORING and I tried not to laugh while simultaneously being annoyed that he was so comfortable and getting some rest! Meanwhile, I just could not get comfortable and had this sneaking suspicion that I needed my nurse, Lexi, to check in on us.

I decided to let Page snooze another 15 before waking him to reach the phone to call her. I’m not sure I made it the full 15 but just as he paged her, she happened to be walking in. She took one peek and I’ll never not laugh remembering her facial expression. She didn’t even draw both hands back, she just used one to grab a radio on her shoulder and started paging through the list of everyone on call…of course not a one answered and I saw her go into serious mode, and yet I couldn’t help but laugh at the urgency. I remember she asked me, “Can you stay RIGHT as you are? And NOT move?” and I laughed again, asking, “are you serious?”

“Yes, totally serious. And I can absolutely deliver this baby if we need to do it that way.” Then she went back to calling on her radio with one free hand and finally got through to someone. I just remember her saying, “We are having a baby. Right now.”

Everyone who had been paged but had not picked up suddenly all flew into the room at the same moment. My OB got situated and three pushes later, you were out. Lexi hadn’t been kidding! 11:06 pm was the minute we met our girl.

I remember thinking I didn’t have ANY tears left in me after the past few turbulent weeks, but despite not crying, I was SOOOO very happy to meet you. Page’s first memory was just how LOUD those little lungs were, followed quickly by those chubby cheeks. We were amazed to learn you’d had your cord wrapped around your neck, not once but TWICE, and that you had managed to tie it in a knot — something so rare the nurses urged us to take a picture of it.

You had come out so fast that after a couple minutes on my chest, you had to have some fluid sucked out to clear your airways. Aside from that and a bruised face from your speedy delivery, you were in perfect condition. 7 pounds, 14 ounces, and 19.5 inches of chunky goodness.

It took a while to get bleeding and blood pressure under control for me, and I remember with the lack of visitors, trying to keep up with texts and updates was overwhelming and we were also SO exhausted by the time things calmed down around 2 or 3am. We got some sleep and unlike my first go round with Crew, I didn’t hesitate to let the nurses feed you a little formula if I meant I could get an extra 30 minutes here or there throughout the night and next morning. I remember laughing at one point when they did bring you in to me — you had such a hoarse, cackly cry at first – you sounded like a smoker!

I can’t remember now if the cafeteria wasn’t open at this time, or if the rules about going through the hospital were more locked down, but either way, friends and your dad made some nearby food deliveries happen. (Nothing tastes better than those first bites after giving birth ha!) I remember eating delicious food, watching you get your first bath, and updating the world that you had arrived.

I was very aware of how Crew was doing and knew he was worn out from one night of sleepover already. Despite only needing 24 hours in the hospital, because you were born so close to midnight, we technically needed another night before they could clear us to go home. We agreed that Page would go home for the second night and get Crew settled back at home, and the boys would come pick up the girls the next morning. It made it so much easier for me to relax and just focus on those early postpartum hours knowing that Crew was with Page and that Page could get a decent night’s sleep in a real bed, knowing all this aftercare would fall to him with no one else around.

After a rainy stay, it was suddenly beautiful and sunny when the boys came to get us. I didn’t think they’d allow Crew in the hospital but someone bent the rules and the boys met us in the lobby for this special meet and greet. Crew’s first response to what he thought — “She has very sharp fingernails!”

We came home to a virtual homecoming, with signs and balloons and little gifts covering our house. It was so weird but also so peaceful to just have that time to ourselves. I have no need to ever revisit 2020 but as far as birth stories go, this one was easy, happy, and packed with good memories.