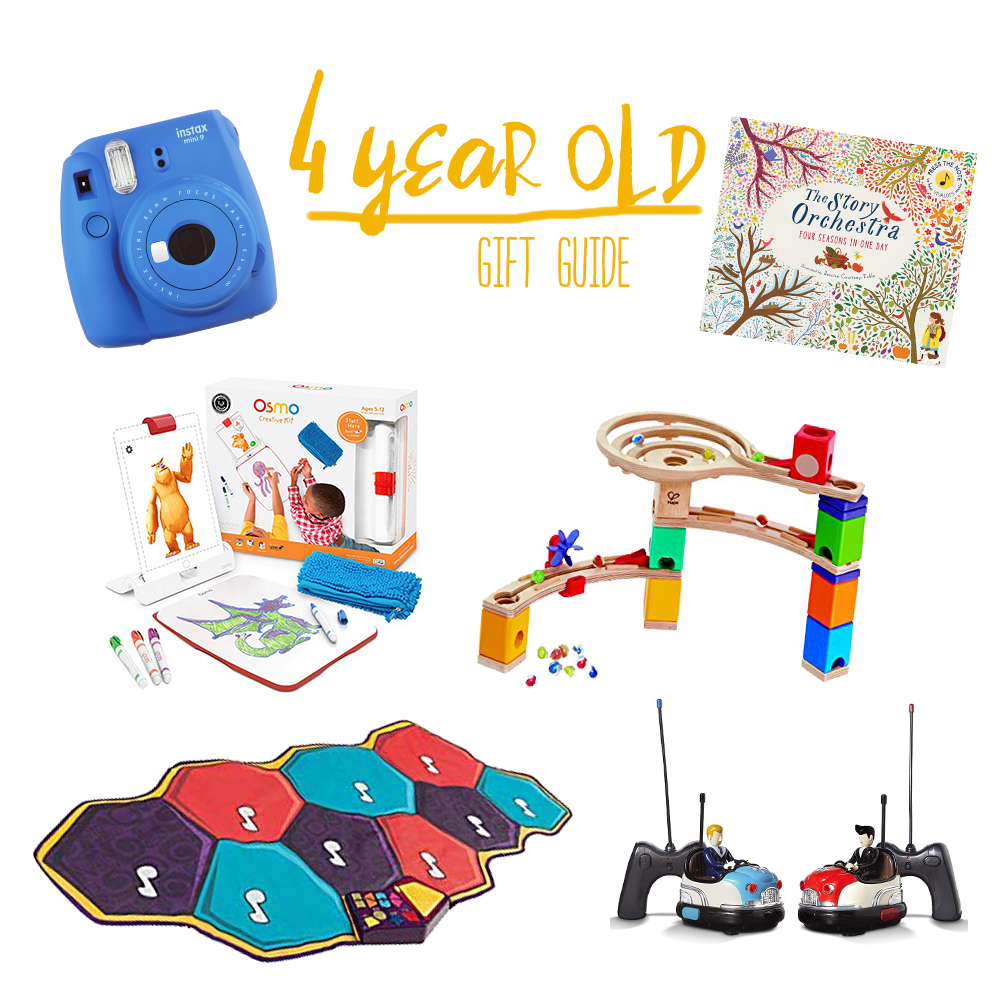 About once a year, I love to share what Crew is especially into as far as books and toys and activities. I LOVE a good gift guide from others whose kids are a step ahead of us to plan for future gift ideas — or to learn what’s hot in an age group I’m less familiar with and need to buy for. Fresh off of Christmas and a fourth birthday just after, we’ve had a very fun (and frankly, needed!) replenishment of new and more age advanced things to do. I love the variety of things Crew is interested in right now — it made it especially fun to shop for him this year (yes, there was still a garbage truck on the list, but at least it wasn’t ALL trucks!). He received a little of everything – action-based, STEM, literary, artsy, musical. Without further adieu, here are the things that are topping our list right now:

This Hape marble run set was gifted to Crew for his birthday. I later learned you can buy other sets and add on, but for now, this is plenty to play with and you can assemble and reassemble it in a few different configurations. We had one of these (plastic) once upon a time and it wasn’t sturdy enough and thus frustrating. Wood, Hape-quality is the way to go on this one. I have visions of saving it for my grandchildren to come play with someday!

The pricetag on the Osmo Creative Kit gave me pause initially — would he like it enough to justify it? I hadn’t heard from anyone firsthand about it. (Click the link and view the demo video to get the full effect!) This kit works with an iPad or Kindle to interact with your child’s drawings. Crew likes to draw but it’s not how he spends his days on end…until maybe now! He LOVES the interaction piece and the challenge to draw different things. I’m not kidding when I say the first time he sat down with this, because it could be completely self-guided, he logged easily an hour-plus and many hours since then. I love that we’re using the iPad for something OTHER than YouTube (eye roll) and I can actually see his wheels turning and his fine motor skills improving. Part of the price of this kit is the base that allows the tablet to work with these kits; once you have that, the other kits can be ordered WITHOUT a base, bringing the cost down a bit. I definitely would consider this pizza kit that allows the child to prepare pizza orders and count back change (again! watch the video to see how it works!), in another year or so.

These remote control bumper cars have been a HUGE hit. More than just an RC car, when one hits the others side button just right, the driver goes flying, to Crew’s giggling delight. They are a bit hard to control for a four year old, but it doesn’t seem to matter, because with two going at once, it’s chaos anyway 🙂

Crew had spotted this piano mat many times over in the Target toy aisle (he loved the beats created by pressing the buttons, but it was still in the box, so he didn’t even understand the extent of what it did) It has been a big hit from both a music standpoint and a winter indoors energy-burner! I notice the price on this on Amazon fluctuates — so check both spots! There are tons of games to play on this mat, from prancing around and tapping out a song, to make silly noises, to creating different beats, or just chasing around hopscotch-style while different music notes light up.

The Instax Mini in our house actually belongs to me (polaroids make great party favors at get-togethers!) but as I’m trying to cultivate some interest in photography with Crew, I’ve been letting him carry it around more and more, and the price point isn’t much more than other “kids cameras” on the market. It’s awesome for making photography tactile at this age and it creates some instant gratification to have a physical picture to look at that he made himself. He quickly understood the idea that the film is not unlimited like digital photography, so he’s learning to stop and think about what he wants to take a picture of, and he understands that when the 10 pictures run out, they’re gone. I’m rationing the film with him but already thinking ahead to Easter basket and future stockings — packs of film would be something he’d get VERY excited about!

Crew was SO INTO The Story Orchestra Nutcracker (featuring, of course, Tchaikovsky’s work) over Christmastime that I had to buy another title to get us past the season, so I went with Four Seasons in One Day (featuring the work of Vivaldi). The little snippets of famous classical music are just the right length for his attention span, and the interactive buttons keep it even more engaging. He loves to to pick out his favorites exclaiming that they sound scary or spooky or silly. There’s only one other title in this series so far, but I’m hoping they create more! We LOVE books and some of the newest additions that have received rave reviews are Knock Knock, The Smallest Girl in the Smallest Grade, Cookies! (the latest in a fun interactive cooking series we’re big fans of), and 3, 2, 1 Blast Off (a fantastic book about the solar system that doesn’t get too wordy or technical like most, for the littlest outer space enthusiasts).

Happy gifting — four is already shaping up to be SUCH a fun age!

Post may contain affiliate links, but all opinions are my own.